Its August 2014 and I am happy to discover that my anger with pay and tax revision has finally died down with memorable July. Actually my anger meant nothing. Its my act of venting out frustration. If not on people, at least on my personal blog, I have displayed my displeasure. If people, especially our politicians are offended, then I am helpless. Please help yourself by leaving my blog.  I suppose this is how an enraged child would behave with his problematic promise making mother. I am happy for being able to put my anger on my blog. I am satisfied. No warning letter from my boss this time. So I am more happy. Seems human sanity is reigning this time.

Elsewhere in middle east, human sanity seem to have dwindled to the the lowest possible point. Perpetual Hamas-Israeli conflict has re erupted and thus the bloody fight ensues. Hiding Hamas and shooting Israel are both to be blamed. However at this time, the disproportionate use of force by Israel against the Gaza Strip is really appalling. In the name of protecting their citizens, Israeli forces, I think are committing a genocide and war crimes. Thousands of innocent children, women and men are trapped and are dying a painful death. Israelis say they are targeting Hamas tunnels. If that be the case, why have they shelled on residential apartments and school buildings? 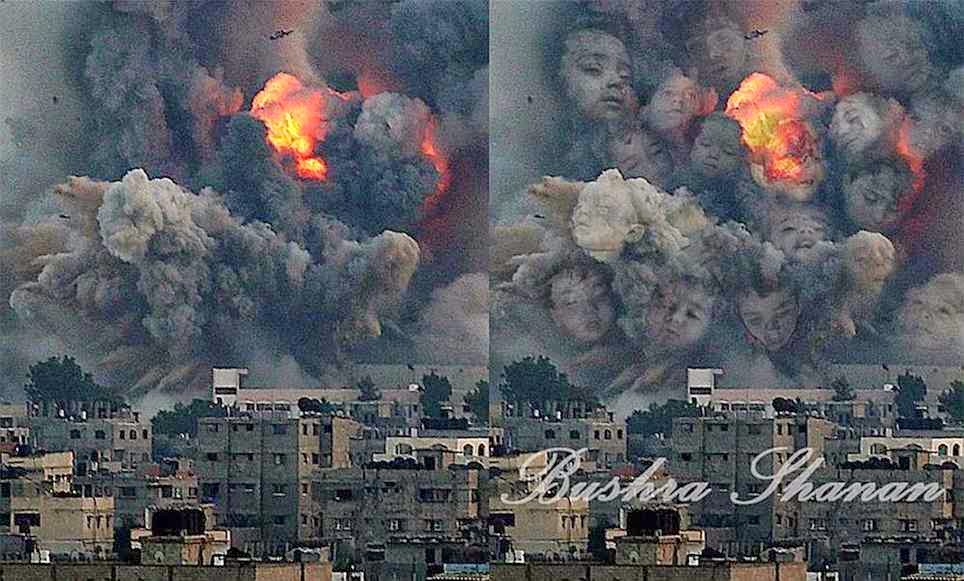 I have never been to Middle East. But from the reports I read and hear, it makes me think that people there are born not to die but to be killed by each other. Lately, Palestine artist named Bushra Shanan, in memory of what is lost and destroyed has created several art pieces. It illustrates grim and desperate reality in Gaza. All the images contain a powerful message. view other images here. But as a father I am deeply saddened to see one art piece (above). It shows how a single cruel explosion is taking away so many lives of beautiful children. Its unthinkable. With this post, I stand here to condemn neither Israel nor Palestine, but killing. Killing for any reason cannot be justified.

Here is a lesson for leaders of Palestine and Israel. There never was a winner in wars. All people suffer equally. Death is miserable reality. Shelling cities will not win you wars. Suitable dialogue and understanding will. May peace prevail in Middle East.

Thanks to Human (in)sanity, global politics has reached a menacing level. Super powers are playing politics with human lives. The manner in which the flight MH017 crashed shocked the entire world. But with passing time, 298 people who perished in eastern Ukraine are becoming nothing but a painful memory like 239 others who disappeared without a trace in flight MH370. USA or Russia, its hard to contemplate who is more evil.

Call it a human sanity or insanity, in India, some Natwar Singh has created quite a stir in Indian politics. As per the information I gathered about him, he is a  former Indian bureaucrat and a close friend of Gandhi family. He changed 4 political parties including the Congress.  But unfortunately he was dropped from the party for his alleged involvement in some high level corruption cases. Natwar Singh tells that Sonia Gandhi was instrumental in taking that decision. He has a son who is now in BJP.

Today, he has reportedly gone angry with Mrs. Sonia Gandhi. Feeling mistreated and humiliated, he has come out with his own "tell all" autobiography, titled "One life not enough". As per the penal discussion on NDTV, The basic motive of the book, it seem is to take revenge on Sonia Gandhi by disclosing the internal affairs of the not only Congress party but also that of Gandhi family. Why would a statesman of his caliber do such a petty thing?  Some call it a biased book while others cal it a work of genius. In between, confused and baffled, some Congress men are now asking where the gentlemen in Natwar Singh has evaporated.

Personally I take two things from this case. 1. In politics, there is no friend.  2. Natwar Singh is an old man now. Old man is twice child. So do not get worked out with his kiddish words (if you are a Congress man)

lastly, human sanity or insanity, scientists have found out that ladies will always find a man with dog more attractive than men with baby. Therefore mothers should make scientists accountable if fathers are not willing to move with their babies.