My trip to Sector 29, Faridabad, India 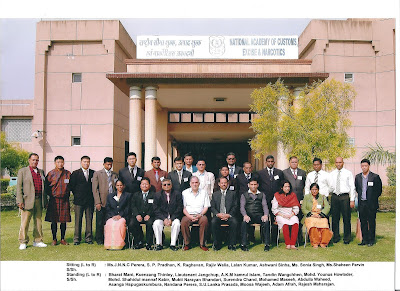 Last November, I was nominated to undergo drug law enforcement training in Delhi. It was computer based training. The duration of the training was four days and we were four from Bhutan.

To me, India is a place where ranks mattered everything. I have even heard stories of official differentiation based in ranks and positions. To this end, I was repeatedly advised by my colleague to inflate my rank (Asst. Customs Officer) when I go there. Even though my promotion date was still more than a month away, I took his words and got my business card printed with my next higher rank (Asst. Collector of Customs)
As a normal human being and more so as a Bhutanese official, I had a very high expectation form my overseas training. Eighty percent deduction of DSA was certainly such a sad and bad news because higher DSA, cozy free rooms, comfortable economy class travel and good foods to eat were some of the things that every officials immediately start to fantasize.
We were also initially issued our travel itinerary to Delhi via Katmandu.
At home, I was busy packing my bag when my tiny purple nokia phone rang. It was from my supposedly team leader. He sounded so uncomfortable. But he had a clear message -the initial itinerary has been cancelled and that the organizers are looking for other options. He again rang me up hours later and said that I have to take a Taxi from Paro till Bhagdora. He was to me, a father of bad news. Overseas travel in Taxi was the last thing I had envisaged.  The fear of catching cough and cold from the bumpy, dusty and perilous high way was a very much foreseeable state of affairs. Being severe sinusitis patient, the fear of having to suffer a severe nasal congestion was even worse and terrifying than the word fear itself. With multitude of thoughts gushing my psyche, I finished packing my small bag.
In the evening, I went to alter alone and lit up a butter lamp; I made a sincere and ardent prayer to the almighty god. My prayers were honest and direct. I am in no mood to take a bumpy ride in a stinking taxi at an exorbitant fare and I am not willing to empty my savings account for the trip apparently sponsored by international organization. –United Nation’s Office for Drugs and Crime.
The next day, I reached Phuntsholing, the commercial hub of Bhutan. My homely colleague there welcomed me with a grand dinner.  Weakened by the bumpy ride in the back seat of the scorpion car, I fell fast asleep in a cozy bed near his newly procured alter. I slept so well that even the fierce lone female mosquito’s attack did too little to disturb my sleep.
If my previous day’s journey had weakened me, my journey next day crippled me. The food became tasteless and my nose became use less. The difficulty of having to breathe meant that I had to use lot of nasal drops which had an adverse affect on my health.
By mid day we were in Bhagdora, eager and ready to begin our travel portion by air. We all looked very pale and exhausted. The trip reminded me of the poem by Nissim Ezekiel ‘The Enterprise’ where he says “trip had darkened every face”. Surely the long distance travel has taken its toll on all of us.
We had our lunch with half cooked chicken curry in a small crowded restaurant.  We were served with water directly fetched from the tap by an under aged waiter.
Lunch served! It was time for us to head to airport to catch our flight.  In the gate, our air tickets were checked by a man who claimed to be the security official. Moments later we were inside the crowded terminal building where passengers scurried everywhere. We got our bags weighed and we checked in.
Suddenly someone announced delay of three hours for our flight. It wasn’t a pleasant thing to hear. There were passengers grumbling and sleeping. The people from the air line frequently came to update the information.

After three long hours, we finally boarded the flight only to hear that our flight being delayed again by another sixty long minutes.
Having waited for almost four long and grueling hours, the plane finally took off. The Flight was scheduled to Delhi via Gauhati. It turned out to be the longest journey for me. The half cooked chicken very well did its job of upsetting my stomach.
Never the less, at around midnight our group landed in Delhi safe and sound. A man named Om Prakash was there to receive us with his toyota indica car. He drove us through the dusty roads and bustling streets of Delhi. After taking many twists and turns, we finally reached to a place where our training was scheduled to take place -The Sector 29 in Faridabad city. The signboard at the gate read “National Academy of Customs, Excise and Narcotics”. I saw few people waiting for us and when our car stopped, two young men came and helped us in unloading the bags from the car.
To my surprise and disbelief, an elderly man led two of us to a different room, some hundred meters away from our friends –The Manda kini apartments. The building looked very old in the midnight street light and there were visible signs of water leakage all around the lobby.
He gave us the key and disappeared instantly. As I opened the door, I found the room no better than the hostel where I stayed during my college days. There was a fourteen inch TV with no cable connection, empty but noisy old refrigerator, broken side table with no doors, wardrobe fitted in the wall with old news papers in it, small water boiler and a small quarter plate with few fresh banana and imported apples. Of all, the toilet appeared most pathetic. The lid of the pot was broken beyond repair, the dust on the window panes have become like a solid rock. With this brief inspection, I went to bed thinking that my rank inflation magic has served no purpose.
Soon I was awakened by my friend next door. He had all sort of ideas to protest. I soon followed his suit because we had all gone there in capacity of officials representing different departments and not as assistants and junior officers. This differentiation was too much to believe so we decided to immediately shift our belongings to other colleague’s room.

Next morning, two of us protested but it fell on the deaf ears. We were neither given new room nor being given the refund. It was Sherpa Dhaju’s delicious food in the mess that kept us going for the entire training session.
Back in the room, we made the best use of all the facilities available in our colleague’s room. We ate all the fresh fruits and biscuits in the quarter plate, emptied the tea stuffs, and used toothpaste and soaps to its exhaustion point. I realized that it was one good experience.
Every evening we went out either to shop or to dine. We sometimes got lost in the middle of seemingly law less city. I remember an incident where an auto operator mistakenly dropped us in sector 19 when we were supposed to go to sector 29.
I think this is how a normal Bhutanese official tells his overseas travel story.
Well, I will  tell my story about the knowledge I gained from the training at later stage, if I remember it rightly.
at Friday, June 17, 2011