Apart from my alto car, a ray ban sun glass and a digital camera with 7.2 mega pixel was the most valued asset in my possession until I lost both of them.

On 22 April 2011, I took my car for a servicing in Sonam Automobiles (also known as Sonam Workshop) in Thimphu. I also bought a  pair of new tyre which I got it fixed in Ajit Tyre services.  Back in Sonam Automobiles, I wanted the technicians to check my wheel alignment. Soon a guy named Novin, drove away my car. It took a while before Novin and friend could actually fix my alignment. Nevertheless they did it. I paid my bill and also gave them small tip.

I straight away drove to vegetable market and before I got out for shopping, I Checked my belongings in my car. To my horror and disbelief, I found my sun glass missing form its case. My immediate suspect was Novin and I rushed back to workshop but found it closed for a day. On 23 April 2011, I had to drive till Bumthang in the sun but without a sun glass.

To make the worse situation more woeful, I lost my camera while coming back. It was a great loss for me and I couldn't even eat my normal extra rice for my lunch. However my father and mother were there to console me for the loss. Amazingly the consolations form my aged parents worked and soon I forgot about the thing I lost.
I reached Thimphu in the evening hours of 24 April 2011. Next morning I immediately rushed to Sonam Workshop and complained about the incident. The management told me that Novin went missing since then and have never even returned for his work.

And Today on 29 April 2011, I found my bank ATM card missing and called the the bank immediately. I told them to freeze any withdrawal from my saving account. The person on the other end responded and told me to write an application but  never told me that application was a mandatory thing.

Coincidentally, I had a very busy day taking my father to the hospital and attending him all day. To this note I called the bank again and told them, it's kind of emergency request from me and that they can block any withdrawal from my saving account even without my application. But a person with this number (17610871) even refused to talk to me. So I had to write an application as under and rush to Thimphu town to dispatch it through fax. 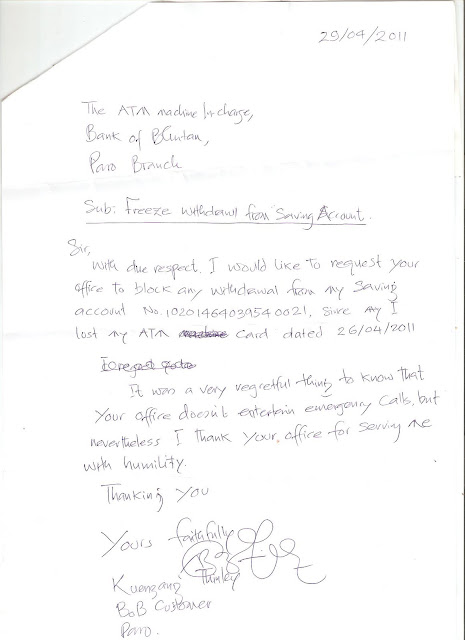 Today I had to go back to workshop again because one of my front wheel buckles. There, I also came to know that Novin actually stole my glass and was found using it before he finally sold it.  I really felt a need to  teach Novin a lesson  for that and even called Police (113) I Told my father, (who is currently sick and unwell) my mother, my brothers, my sisters and my in-laws. They all told me not to teach poor man a lesson.

So I have now decided to withdraw my complain from Police. Tell me if I am being very nice by letting that thief go free and also wish me luck so that I can have means to buy a better camera and a sun glass next time.

Email ThisBlogThis!Share to TwitterShare to FacebookShare to Pinterest
Labels: Bank of Bhutan, my ATM card., my camera, my sun glass