My Father is More Than Hero.. Part One 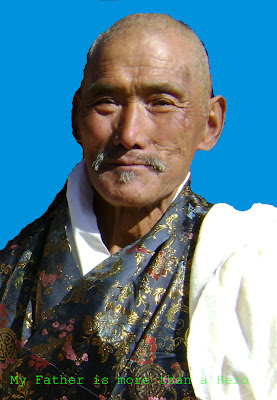 Once upon a time, when I was young, innocent and green, one of our senior Government officials visited our school. Before he talked extensively on the importance of education, he asked us one question. I was too young then to apprehend as to why he asked that question. But he asked us with great interest and intensity. “Who is your Hero?” He asked us. No sooner did he ask, and then came the roaring answer from my mates. There were many who shouted Salman Khan, Amithabachan, Sharukh Khan Superman, Shaktiman, Spiderman and the list went on. It went on for some time but when it finally subsided, He pulled me from the line and asked me the same question one more time.

I had no beautiful answer for him but I told him that “my father is more than hero” to me. He sounded unsatisfied and so were my mates. They all giggled and I blushed. I even overheard some of my friends making mockery out of my genuine answer. Some said my father is “carpenter Hero” while some even doubted as to whether I really understood the meaning of the word “Hero”.

Since English was (is) not my mother tongue, it brought me many questions than I could actually answer. English, those days was considered as a language of urban aristocrats, but rural drunkards occasionally took the liberty of misusing it. In my blushing and uneasy moment, I even felt like I was a rural drunkard who misunderstood the meaning of “Hero”. In other words the word “hero” made me contemplate, think and rethink deep all through my life.

Email ThisBlogThis!Share to TwitterShare to FacebookShare to Pinterest
Labels: My father, My Life