Tribute to our Beloved Drukgyel Zhipa 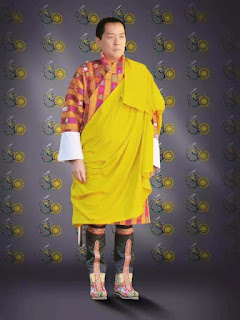 Sometime in 2011, our popular blogger, Mr. Passu, in his blog "remembering-young-jigme-at-17." asked us these questions:

At 17, what were you doing? At 17 what are our kids doing now? Remember at 17, His majesty ensured happiness for all of us till the end of time. The best way to celebrate the life of the Great IV is to leave behind our excuses and start giving our best!

And here is what I wrote:


At 17, I was in 8th grade. I was running away from my school for no apparent reason. Other times, I was also busy fishing around chamkhar chhu in Bumthang. At 17 I was a hungry boy. and I busy stealing food form school kitchen. At 17 was, I was busy in the night, moving from one apple garden to another. At 17, I was more worried about the assignment of the girl that I liked than my own. I was rather happy seeing her even if she said I was ugly. At 17, I didn't even know I was 17!!!!!!  At 17, I had my friends reprimanded by their parents for befriending me. At 17, I was simply too wild. But I am all the more happy and grateful that we had a king who led us to the path of happiness at 17. Thank you our beloved King. I am blessed to be your Subject.

The first time I saw His Majesty in person was in 1990s. I was a little boy then, probably 11. I still remember how we got ourselves prepared for his visit. All the elderly people from our locality gathered bamboo, so that a shade can be made for the gathering. Small gate was erected from the locally available green grass to hold a welcome banner. We were told to put on our best dress and I still remember a pair of black gumboot my father bought for me. Our seniors in the school practiced welcome dance from dawn to dusk. Quite a few of them even over ate pepper in their attempt to enhance their voice. I vividly remember how our school captain memorized his welcome speech, only to be awed by His Majesty's presence and stood frozen in the front. His Majesty told us to work hard and be a responsible citizens. But honestly, rather than his Majesty's speech, I was fully engrossed with the four queens; distributing us the sweets. After a grand lunch, His Majesty left our school. Elderly ladies from our village wept like a child to see him and entourage go.

And the second time I saw His majesty in person was in 1997. I was in 9th standard then. His Majesty and the entourage was in Bumthang to preside over the 7th Plan review meeting. By then I was a grown up man. Many boys of my age were chosen to serve the public that day. But something went amiss in the morning and we were nearly late for the occasion. Dasho Pema Dorji, erstwhile Bumthang Dzongdag nearly ate some of us alive. He chased us like a wild dog and we all ran like a frightened deer. We reached the Wangdicholing meeting ground. There, another Dasho ran terror. Dasho Zimpon, Dorji Gyelthen taught us the art of mixing whisky and water. He used 99% water and just 1% whiskey! Later I realized that he had his own wisdom and reason in doing so.

And the last time I saw His Majesty in person was in 2005. It was in Lungtenphu, Thimphu. I was 25 and I was undergoing my Post Graduation Course in RIM. People from Thimphu Dzonkhag along with the students from all over Thimphu gathered to hear His Majesty talk on the draft constitution of Bhutan. I believe some 7000 people attended the meeting. I tried my best to get a seat somewhere in the front row and happily managed one. As the meeting progressed, there were signs of young guys getting bored. The frequency of people getting up for loo was increasingly becoming a nuisance for the security guards at the back. I had my bladder full too, but I tried to hold it back.

In the middle of the meeting, an elderly man rose to the occasion and said that our constitution should also have a clause that would restrict future Kings from marrying more than one Queen. The man was obviously reading and it took him a while to complete. By the time he was done, there was deafening silence all around. I was nervous and for once I even forgot about my full bladder. It prevailed until His Majesty himself spoke. His Majesty smiled and said, "we are discussing Environment and he wants to discuss wives". Like wise, His Majesty responded to many such queries from the public. Meeting ended on a very happy note and I went home feeling ever nostalgic.

With this, I would like to join the Nation in celebrating our beloved King's birthday. May the longevity Buddha bless him with Long, healthy and happy Life. Thank you. Your Majesty for leading us to happiness.

Email ThisBlogThis!Share to TwitterShare to FacebookShare to Pinterest
Labels: Birthday Wishes for my King, Constitution of the Kingdom of Bhutan