X-ray machine for Customs and BAFRA in airport 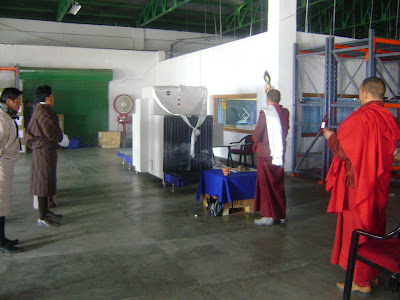 Department of Revenue and Customs (DRC) and Bhutan Agriculture and Food Regulatory Authority (BAFRA) have jointly procured three X-ray machines worth Nu. 3.3 million each in Paro airport. The inauguration ceremony of the same has been done with all the Lhap sang trhuesel ceremony on a very pious and suitable date as per Bhutanese astrology (12.1.2011). The ceremony was graced by the Director General of Department of Civil Aviation (DCA), Dasho Phala Dorji.

There were also some officials from the suppliers office,-Ms. Ugyen Trading House. The proprietor of the Company, Mr. Ugyen Jamyang was there with his senior Engineer Mr. Anub. Media people included Mr. Chimi Dorji and camera man from BBS and a Lady Journalist from Kuensel Corporation. Mr. Sonam Dorji, Dy. Collector of Customs and Ms. Dema of Public Information Services (PIS) of DRC head office were also present to mark the occasion.

Mr. Yonten Namgyel, the Regional Director, Regional Revenue and Customs Office of Paro, In his opening remarks said that with this Procurement, the Customs  and BAFRA officials in the airport will not have to 'harass' passengers by making them open their luggage. Having said, he also meant that there will be neither cent percent baggage and cargo scanning nor zero check of the same. The most important of all, he said that the x-ray machines will enable customs and BAFRA officials in expediting the clearance of the passengers transiting through Paro airport. He thanked the Executive Director, Mr. Karma Dorji of BAFRA and Ms. Kezang Samdrup, Head of PIS section, DRC for showing immense co-operation and sense of unity in this endeavor. Customs and BAFRA officials in airport are now equipped with one of the latest and newest x-ray machines in the world. He also thanked DCA for all the technical support rendered during the installation process.

With this, Mr. Ugyen Jamyang, the Proprietor of the Ms.Ugyen Trading House took the floor. He had a brief description of the machines. Some of the notable points from his address were as follows: One, the machines were made in USA by well-known company named auto clear. Two, the machines have a very unique features unlike commonly used x-rays elsewhere in the world. The machine will produce an alarm sound when ever any objects of interest for Customs and BAFRA passes through it. Any objects when put through it, the contents will be indicated by circles in different colors. Red circle will indicate dense and inorganic objects like metal and objects made form it. Green Circle will indicate organic materials. This will be of interest for both the agencies as most of the things they look for are organic. Then there are also colors like yellow, blue and orange to indicate different objects like inflammable liquids and gels etc. Thirdly, he stressed that these machines are smart machines and can even produce separate images for the bags put together at a same time. Fourthly, He said that all the parts except the generator can be very well repaired here in Bhutan -perhaps with Mr. Anub's expertise. He Thanked RD, RRCO, Paro for having him given the opportunity to briefly describe the machines supplied by his company. With these machines, he said that no undesirable substances will make it to our country.

The formal inauguration ceremony then took place when the chief guest of the occasion unlocked the silken knot hung around the machine and its screens. All the officials present applauded to mark the new era for Customs and ABFRA with x-ray machines in airport. Few bags were screened to mark the ceremony in more profound manner. The images were then interpreted to chief guest by Mr. Anub. For some officials, the moment was like buffalo finally having the salt form the Yak. -although it never happened in the story.

Mr. Wangdi, of the BAFRA who was dressed in his ceremonial uniform, passed the concluding remarks. He thanked all the officials for making up to the inaugural function.

No sooner did the inauguration ceremony ended, and then began the suja daisy session. It would be unbhutanese way to mark any ceremonial occasion without them.

Being Officer In-charge for Customs, it wouldn't be fair if I do not share  my thoughts about it with my friends who read my blog.

The manual  luggage check was all about confrontational. No body.  and I mean no body liked being checked. This included those very people who made this very  law and rules. There were times when we were harassed to the extent of being slapped on our face for doing our duty. Not only that, there were also times when we were even called for a dual fight by some of the lunatic and frenzy people. There were people who openly took us for granted because they had the links with so called high profile personnel in the bureaucracy and that they are above  Customs check.  At times  I   felt that we were the least protected civil servants because we were often left to the mercy of our own protection. There were Toms who once  said "you are wrong" when we thought we did our job; -our bread and butter the right way. The offenders were never punished by the concern authorities even if reported in black and white. Often, our reports boomeranged back at us we had to justify our law implementation. And least of all, and the most saddening thing of all, majority of the commoners today  still feel that corruption and bribery are synonymous with Customs.

In fact, Customs officials are the most feared agency in airport  for apparently no reasons. Especially for those Bhutanese travelers returning home, his or her  immediate concern is not safe landing but unchecked and un-taxed exit form the Customs area. Since taxation is a way or robbing people legally, we are no more than  thieves. Thieves at work in broad day light. So we are the most misunderstood group of people in airport and with the installation of x-ray machines, we risk being called an armed robbers.

But on the positive note, I would agree with my Regional Director, when he said 'expediting passenger clearance transiting through Paro airport. I also agree with Proprietor Ugyen when he said that no unwanted substance should enter our country. But  I would never agree with anyone accusing us of being harasser and problematic. We are here in airport to facilitate and educate people on import and export rules of our land. We are here to protect our society form narcotics and other restricted and prohibited goods form entering our country. We are fun loving people, We are people who cried but hid our tears behind the sun glasses when incidents like December 15 occurred in our country. Customs family and BAFRA family  in the airport would therefore like to reiterate that procuring x-ray is a sign of development and progress. We anticipate no cigarette and other tobacco products smugglers landing in the jail as a result of this acquisition.

Finally, My sincere advice to all the travelers would be as follows:

1. Always declare what you have to the Customs, even if it means your personal effects.
2. Never think you can deceive and fool Customs officials, We are a trained psychologist and human mind readers
3. If you are proceeding through Green Channel (nothing to declare channel) make 10000000% sure that you have absolutely nothing to declare.
4. It is always safer and advisable to proceed through the red channel, even if u have nothing to declare.
5. Know you allowances well in advance
6. Customs do not like falling into arguments, Be careful
7. Do not come to customs counter with blank declaration form.

So if you think you have taken care of the above mentioned points then do not worry about customs, worry about you safe landing because Paro International airport has  one of the shortest runways and is considered one of the most dangerous airports on this planet (if i am not mistaken, If  I am then, please forgive me)

By the way, the X-ray machine (arrival section of  the passenger terminal) is installed in the green channel. Passenger who have something to declare are always expected to proceed through the red channel. Passengers who have things to declare but still chooses to proceed through green channel will have to risk being checked, taxed and even other consequences.

The x-ray machine in the Cargo terminal building will be solely used in screening cargo shipments and other export shipments. This will immensely  benefit for our exporters  Unlike in the past they will not have to take their shipments to passenger terminal for screening because both documentation processing and screening can be done here in the Cargo terminal itself. It will also have a positive impact for our regular importers and courier services, because only few packages and boxes will be open for physical verification after having completed the screening process.