My Trip to Tokyo; Conclusion 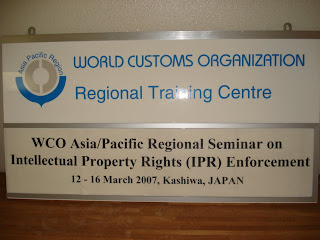 As we came out of the bus, it was a bright sunny day then, the officials from the Customs Training Institute (CTI)  of Kashiwa came to receive us. There were three men and four ladies to greet us at the gate. All of them looked young and I supposed them in their mid 20s. They all looked gorgeous in their tidy dress. All men wore black suits while ladies wore skirts and long jackets. They all bowed their head to welcome us.

I smiled back and bowed my head  in response. I shook hands with all of them and told them that I am Kuenzang form Bhutan. They reciprocated the same, but my poor memory couldn't do justice in remembering their lengthy and difficult-to-pronounce names.

As we proceeded further inside, the hostel had a standard far better than those 5 star hotels in Bhutan. It had electronic doors that required password to open and close. The wooden floor were well polished and looked very bright. The hostel also had a kitchen, laundry room and a separate TV rooms. Everything looked well planned and well arranged. They handed us the room keys and told us not to take our shoes to our room. (Because they feared that we would destroy the well maintained wooden floor) Instead we were given a pair of soft rubber slippers to wear while moving into the room.

I walked to my room with the slippers on and finally made to my room. The room had a metal door and it didn't have a number. They have put my name and along with the National flag of Bhutan. This honestly made me feel proud and happy. I took out my camera and took a picture if it. I felt like I was given VVIP treatment.
I was soon called to the conference hall where all the participants from different countries gathered for the opening ceremony. The ceremony was chaired by one of the senior most official form the Tokyo Customs along with the technical experts of World Customs Organization (WCO), Regional Office for Capacity Building for Asia Pacific Region, Bangkok (ROCB) and the officials form Regional Intelligence and Liaison Office (RILO) Beijang.

Opening ceremony was soon followed by an Introduction and orientation program. All the participants choose to introduce in English. There were people who spoke fluent English while there were also few who could not converse well in English. During the orientation program, other than the history of the Institute, participants were mostly briefed on dos and donts of the hostel. We were strictly advised not to cook in the hostel kitchen and that we would be served all the meals form the official mess in the dining room.We were also given our long and most eagerly awaited daily allowance. For people like me, the organizer even reimbursed the cost of air tickets. We were all paid in US Dollar.

That moment surprised me because I was paid a hefty sum of US dollar 1400/- for a five day seminar with free accommodation, free food and free air travel. I honestly couldn't believe my eyes. To pull myself back to reality, I even approached the organizers to find out whether the amount they paid to me was right. That was a lot of money and it truly was a windfall gain and cornucopia of fortune. As the day drew closer to dusk, I went back to my room, with my hands still holding the money in disbelief.

In the evening, we were all invited for a welcome dinner. I couldn't eat much but  talked a lot. I talked with  most of the delegates and all of them had a fair knowledge of  my Country. They knew about the benevolent king we have. They also knew that development in my country based more on human happiness than material well being.

Next day, the seminar on IPR actually began. We were given countless handouts and reading materials. There were also some delegates who gave their presentation on the status of IPR infringement and IPR protection action plans in their country. We had few of the resource speakers from companies like YKK, HONDA, NOKIA, MPA and SONY etc. Participants were mostly educated on the subjects like, IPR policy of Japan, Trade Related Aspects of Intellectual Property Rights (TRIPS), WCO IPR strategy, IPR and the problematic postal system and WCO Model legislation of IPR. Some of us carefully took notes form the presentations when some of our friends peacefully slept on their chair.

Back in the dining hall, I felt comfortable dining with my colleagues for India, Pakistan, Afghanistan and Nepal. We basically had the same manner of dining compared to those people form China, Japan and Europe. We were mostly served rice and fish. Sometimes we were also served egg and and vegetables too. Of all the meals, I enjoyed breakfast most because of its sheer varieties. I went to thank cooks after every meal and sometimes our conversation got prolonged. They were mostly elderly looking ladies and they had very good  knowledge of geography; Mot of them knew where Bhutan is.

We also had a day  half day program in Tokyo Customs in Odaiba. The officials there basically took us through the working areas of Customs like the scanning area, assessment area and to the Customs museum where the seized IPR infringed goods were displayed for the public to create awareness. The museum also had a collection of uniforms of the different customs administrations around the world. The seized wild life products like crocodile skin and polar bear skins were also displayed.
Soon after our half day program with the Tokyo Customs, we were all taken to another part of Tokyo called Akhiabara. The guide in the bus told us that, it is the City of the Electronics (of the world). People often had the saying that " you name it and Akhiabara has it".

We all went out to check the authenticity of the statement ourselves. We were given only limited time but it was worth spending. I spent  most of my time in just one departmental shop. They virtually sold anything between the sky and the earth; from food stuffs to flowers, garments to garlands, cameras to candy and toys to truck. They had it all. I bought a gold plated spoon which had a picture of a lady in traditional Japanese costume and the beautiful mount Fuji. I bought it for my daughter.

On our lat day of the seminar, we were all given a CD that contained seminar materials and the pictures taken during the seminar. The organizer of the seminar reminded us to get proactive with the IPR enforcement. They also gave us the certificate of participation along with a gift form Japan Customs, which was digital watch. The certificate with the WCO logo looked prestigious and digital watch with the logo of Japan Customs looked precious. We were also given a list of all the participants which also included details like e-mail address and telephone numbers. We all agreed and promised  to keep in touch, both officially and personally. We took numerous photographs and vowed to remember the place forever. As we bid adieu to each other some participants went emotional.
With that, I closed my beautiful and fairly tale like stay in the beautiful city of Kashiwa. Today after 4 long years, I still fondly remember the city in its full beauty; the beauty of  foot paths where elderly people went for walk along with bicycling youths; the beauty of noiseless and unperturbed traffic; the beauty of peach trees and the spring festival; beauty of the sun rays and the clear blue sky; beauty of cold ocean current  in the early mornings and late evenings and the beauty of the warm breeze in the afternoons, Those memories still enchants me and makes me nostalgic.

Today I look at a faded gold plated spoon, a non functional digital watch  and certificate with torn edge and tell myself that I have lived in my "dream land" once.
at Thursday, March 03, 2011