Some of the least the frequented sites of Bhutan, The Legend of Pelri Lhakhang. 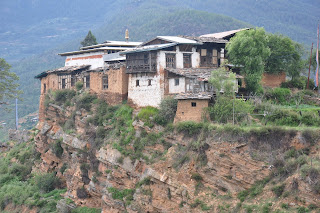 On a hill  and cliff overlooking Bondey valley in Paro, (which resembles the head of snake) a small temple was believed to have been built by famous Drukpa Lama called Yongzin Ngagi Wangchuk. The place was named Pelri. Roughly meaning harmonious and divine hill. Of the two such hills in Paro Valley, (one in Shaba side) the lama chose to built Lhakhang only on the hill where the Lhakhang stands today. (as Pelri Lhakhang of Bondey)
It is widely believed that the temple was initially built to subdue the demon which roamed the valley in form of snake. The demon not only brought multiple sufferings to the locality but was also believed to have been a man eating ghost.

Later, the Gelug sect of Lam Khag Nga (five different Buddhist sects who were widely acknowledged as the sects who revolted against the Drukpa sect) established their seat. It was believed that they built a nine storied mighty towering castle, where the present Lhakhang stands.

It was also during that time, the other Buddhist sect called Drukpa Kagyu spread across the land. The spread of Drukpa sect spear headed by Zhabdrung instilled some sense of insecurity in them. As a result, they planned a revolt, of which Zhabdrung knew in advance.

Before the revolt, the chief of the Gelug sect called his versatile artist to paint his version of the Gelug sect and the Drukpa sect. In a very customary-subordinate manner, to please his boss, the painter painted a picture of his boss in a very colorful traditional chipdrel ceremony, riding a horse. And in similar manner to show his support to his boss and more to insult Zhabdrung, He painted a picture of Zhabdrung, sitting under a tree, in a meditation posture with all the torn cloths.

The painter submitted his work to his boss, which devastated him. In other words, his painting came as a prophecy for his boss to leave the place immediately. The sitting posture of Zhabdrung came as another prophecy that his legacy was there to flourish permanently.

Coincidently, Zhabdrung was meditating in very close vicinity. The simple meditation was strong enough to bring down the castle. With just ground floor remaining intact, the main relic in the temple; -a statue, requested Zhabdrung to at least spare the ground floor for him.