One Year in Gujarat. 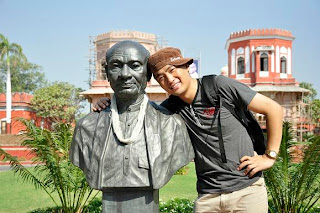 I decided to pursue my tertiary education in an age, where every average Pema and Dema eyes those exotic universities in Australia and Europe as the ultimate education destinations. Every Prospective Bhutanese student dreams about it, because there is a general believe among many Bhutanese that one can mint a lot of money and in course of two years. I don't know how but many believe they can build their empire. As it stands, this notion have taken deep root. For now it seems most people are more after "money making" than real education.

I don't know which one I chose, 'education' or the 'money making' but under the auspices of GoI scholarship, I happened to be one among six Bhutanese who landed in Gujarat in the fall of 2011 to pursue my tertiary education. Forgoing all those fortune making opportunities, I chose; -well, in words of few people, a slum somewhere in India as my education destination.

Prior to my departure, I remember attending a briefing session. We were not even twenty, so it was a small insignificant number not deserving of a grand briefing session with meals and banquet. But nevertheless, we were briefed by one Dasho, who  almost took half the session briefing us about GNH. At the end, we were given a book about Bhutan. I liked it so much. The pictures in the books says volumes about Bhutan.  We were also given a small national flag which in the words of Dasho ‘would remind us about our home-sweet-home'

I reached Gujarat in good health, but felt lost and nervous.

However I am now nearing to complete my first year here and I have lot to reflect and recount on. From a fan less room to a water less bathroom, from a bed less bedroom to a table less study room. It was all but an adventurous going. In those adventurous mood, I thought to my self that even without those basic  necessities in my room,  it would be so wrong to consider my place as a slum. So the very first realization I had was that, I did not land in a Slum to pursue my Masters course.

But on the other note, it turned out to be the most painful days of my life, not because living condition was horrible, but because I missed my home more. Even tough I was given the apartment fit for 'Readers', it took me many agonizing months to settle. But with each passing day, I came to agree with the terms of living a life away from my loved ones. More, when I started making friends with Gujarati fellas, I started appreciating life away from home.

Diversity in Gujarat took me to higher level of understanding humanity. Starting from a Autowalla, who charged fares not by judging the meter but by looking at the faces of commuters to a retailer and a vendor who charged prices not on the basis of weight but on the basis of bargaining power. From Homeshop18.com to flipkart.com who delivered books at my door step. From 'Times of India' to 'Ahmedabad Mirror', the papers I subscribed but did not read. From 'pani puri' to KFC, that drained my wallet, From 'Lal darwaza' to 'Jamalpur darwaza' where I squeezed-in in the street to get the best possible secondhand books. From Vestrapur to Gandhinagar, from Kankaria lake to Sambarmati river. From Gandhi Arshram to Gir Foundation. From CG road to MG road. From ISCON mall to Alphaone mall. From Hyper city to Shoppers stop. On goes the list and on goes the insight I have gained.

My association with friends, both Bhutanese and Indian have further enhanced my understanding of human behavior. I feel truly privileged to have come to a place far way from home to learn about the complexities of human values and Morales. I am astounded to learn that human beings are truly a surprise package. I saw that in the gullibility of  a  man, promises of a gentleman, frailty of a women, Beauty of a being faithful and on goes the list. In the midst of all, I have also learned that that how a hollow man really sounds like an empty vessel while the honest browny man remains undeterred and unmoved like a everlasting mountain.

I wouldn't say that in one year time, I have transformed myself from a Caterpillar to a butterfly. But I wouldn't deny the intellectual richness I gained by coming to Gujarat. I feel blessed to have associated with some of the most learned people in Gujarat. All my professors have showered unending love and support from the day one to which I humbly remain indebted. It is here that I further expanded my horizon of knowledge.

Gujarat, indeed has become my home-away-from Home. For now I am truly enjoying the enchanting biodiversity and ecosystem that surrounds me.  Even though the tropical heat is little uncooperative for a man from cold Himalayas, I think, for now I am reasonably well adapted.
at Saturday, April 28, 2012