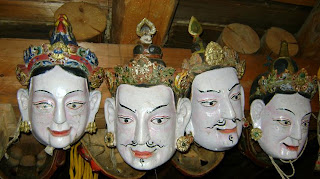 Ever since the day my family sold off our yaks, I felt a great sense of loss. We let our dad's most prized possession, which took so many decades to accumulate, go in a wink. I was helpless like my dad. All I could do was blame the forces of change. After so many years of close association, it pains my heart to even think of those beautiful animals gone forever from our lives. To me, this feelings indeed indicate how much indebted I feel towards those animals.

But today I am not going to write about yaks. Today, I will not even let the topic of yaks overwhelm me for a second with emotions. It’s about the most coveted saying that I am going to write.

“Graze like a hungry yak".  It actually means work hard.

Although I never fully understood the sublime meaning of the coveted saying, I did my best to interpret it in my own ways.  For a worker, it literally means working like a shaving blade, not  leaving any hair standing. For a student, it meant running through pages of the text and trying to get everything, either through understanding or through mugging. There were days in my distant past, where my friends would even memorize the registration number of a truck in the picture in our text books! Such was the way we grazed then.

Grazing like yak was not at all fun. Sometimes it was killing and boring. But like it or not, there was no other options. Everyone in life has to pass through this and I was no exception. I too did my grazing-like-yak part. So to say, I grazed like a yak even when I was really not in the mood.  But now, I  think I got this far in life for having grazed like a hungry yak.

Not only that, As I plan to move further in my life, I see grazing like a yak has lot more meaning than I saw in my earlier days. As I graze in the endless pasture, I make sure that I graze to the best. But when I look back, it awes me only to find the grass behind has grown lot taller and that it needs further re-grazing.

Email ThisBlogThis!Share to TwitterShare to FacebookShare to Pinterest
Labels: Education, My Life, Yak