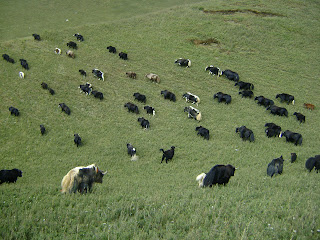 More than five years ago, I persuaded my father to sell off his most prized possessions. It consisted of little over 50 yaks, both males and females, milking as well as non-milking.  The reasons were simple and straight. Notwithstanding an adverse economic implication at home, I wanted my parents to come out from that nomadic life for once and for good. As an educated son with a decent job, honestly, I couldn’t bear to see my parents still toiling after beasts in the wilderness, -all round the season.

But I was surely not the first offspring to persuade him. In the past, many such attempts have been made by my elder siblings too, but none succeeded in influencing dad. Those radical advices and persuasions simply failed to lure or divert dad’s perspective.

Having survived the harshest possible life thus far, it was his notion that living his life, his way, on his terms was something that amused him more than anything else. As an ardent hard working farmer, laboring was something he cherished and so were his hardships with yaks in the high up mountains. To him it was just another season that would pass like any other ordinary days.

In all those long years, I thought my dad was right. I thought he has made an apt decision not to relinquish his possessions, because Shingkhar has been for ages, an ideal place for yak rearing and therefore his decision to continue the legacy of yak rearing was right by many folds.-He was right culturally. He was more right traditionally, ecologically and economically.

But with time and space even the fortitude as that of my dad’s is also subject to change. Change can neither be imposed nor can be forced. Such is the state of affair with my dad now. He now realizes that his ailing health is no longer energetic to answer the calls of the duty. He feels the crippling effect of old age. With no more options left, he is now on verge of becoming the last Shingkharpa to relinquish yaks for good.

His relinquishment would mean that yak is facing extinction in Shingkhar! the worst nightmare, long feared by my dad are soon becoming reality. While making that decision, My dad surely must have felt thousand steel hammers beating and tearing his heart apart.
When the yaks are long gone from Shingkhar,

I will remember them as follows:

I grew up with yaks,

They are the animals that my dad loved

Because they were source of our livelihood.

On my rare trips to his domicile,

I remember myself being fed with butter

That sized larger than the plate

And a tea prepared not with water

But with cent percent milk.

In summers he would go lavish

Sending me and my siblings

A parcels of butter wrapped in etho-metho leaves

And cheese in white sacks.

Email ThisBlogThis!Share to TwitterShare to FacebookShare to Pinterest
Labels: My father, My Life, Yak