Shingkhar Dechenling is said to be the foremost of the eight holy places established by Omniscient Longchen Rabjampa in Bhutan at around 1308-1363. The 14th century master who propounded the philosophy and practices of the Dzogchen School of Buddhism, Longchenpa who was assisted by one of the primary protector deity of Nyingma, Rahul, meditated at Drogri Rinchen Jungney (Garkhai) and preached in the beautiful valley below. Later his great grandson, Tsezang Thaye Drakpa built a small temple to enshrine the sacred throne and became the first Shingkhar Lama. The throne was discovered in 1999 when renovating the temple. Currently, it is adorned with yet another wooden throne to elevate the life size statue of the master himself.

Today, we the youths in Shingkhar under the leadership of Dasho Lham Dorji and Lyonpo Minjur Dorji, are initiating "Longchen Thongdrol Project". The primary objective of the project is to pay homage to Longchenpa and his teachings. This magnificent Thongdrol is also for the general well being of  all the sentient beings who are constantly longing to see the end of samsaric sufferings and to bring harmony, peace and prosperity to the World at large.

Therefore it is our humble request for all the devoted followers of Longchenpa to come forward and play a part. We wholeheartedly assure that contribution offered in any form will not go in vain and that everything will be properly acknowledged and accounted for. 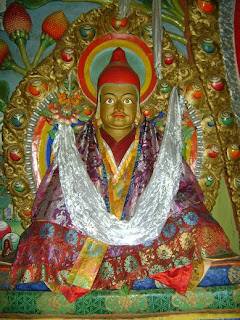