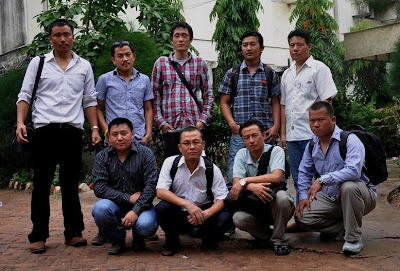 Exactly one year ago, me and five other Bhutanese friends arrived in Gujarat to pursue our masters education. We  reached Gujarat in such a haste that we didn't even have time to get ourselves oriented to the place. Basically, we took a flight to Ahmedabad without even knowing who would come and pick us up from the airport. But thanks to our senior Bhutanese friends (who were already studying here), our first night was anything but a good beginning.

They knew we would  come like a blind man; not even knowing the most popular man of the place;-Narendra Modi, the chief Minister of the state. They also knew, well in advance that we would show up inasmuch loss in mind as we were fatigued and frustrated physically. Therefore to sooth us in all whatever aspect, they  extended all their wholehearted courtesy. They were not only in the airport to pick us up, but they have also arranged a very humbling banquet in our honor.

And in the similar manner, when nine other Bhutanese friends made to Gujarat for the same on 30th July 2012, me and one of my friends had to extend the same level of courtesy to our new coming friends as our seniors did the previous year; -we were to become their Guide! We went to pick them from the airport but on our way back, two of us nearly lost our two new coming friends when an auto they were travelling lost sight of the auto we were travelling. Worse, they didn't have our phone number to trace us! In fear I nearly had to run to Police station, but I thank God, for I found them in whole piece in a while.

The next day, it rained cat and dog. Its probably the first heavy rain in Gujarat this year. The incident brought the same old memories rushing trough my mind, because Gujarat had the first major rainfall the same time we Bhutanese made here, year ago. While waiting for their college bus in the rain, we talked among ourselves in gaiety that Gujarat will have no rain unless some Bhutanese come here every year.

Few minutes later, the bus showed up. As I bid them farewell, they thanked me for being a "light in the darkness". For now, I remain content that we have some more Bhutanese friends in Gujarat. Some in Gandinagar and some in Ahmedabad.