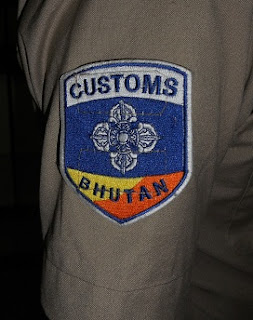 Initially when I joined Customs department in 2006, we had a uniform which people mistook it for the uniform of Punakha High School. It  used to be a decent gho for gents and Kira for ladies. We were even issued rain coats and boots! But in course of time when Government supplied us a staff duty vehicle, a thing of boot and a coat (rain) became our beautiful past.

Then it was in 2011.  I should say, it was the dawn of new era for Customs department. At least in terms of uniform! Filed officials were issued with new set of uniforms. That time our traditional gho and kira were being replaced by trousers, shirts, belts, ranks and logos all of which had colours that are utterly difficult to name. To mark the significance of the newly innovated  uniform, we even had a small inaugural ceremony in our office.

At a national level, the story was even reported in local media. As expected, the story was received by general populace with lots of humor. Had it not been for the logo and the rank on the shoulder, some people said we resembled truck drivers or the hawaldars of Jaigon. I don't know how fair that comparison was but we certainly had a lot of problem stitching the trousers and shirts that fits our body.

Today, our uniform is three years old. I think our department has put in lot of effort to make it a presentable one, worthy of being worn by the custom officials of Bhutan. Our logo looks impressive. Boots and belt looks awesome.  But when it comes to rank on the shoulder, I think we have more people amused by it than being awe-stricken by the same.

The last person to be amused by our rank system was none other than our Royal Highness, Price Namgyel Wangchuck. (Gyaltsab) One of my staff told me a hilarious story where his Highness ran out of words describing the rank on his shoulder. Five strips on his shoulder indeed was a lot of rank that day!!

There was a long tradition that prevailed between His Highness and our office. Its was the most beautiful tradition in my memory. When ever our staffs, especially inspectors went to deliver the Royal consignment, His Highness had the tradition of gifting  them  Soelra. Therefore delivering consignment in Majaling palace used to be a thing of joy for our inspectors. But sadly not any more. Our staffs presume that His Highness has now mistaken them to be the Pilots and captains of the airline, who earn quite a lot themselves.

I was also told about how our rank system has astonished the Chief security officer of Civil aviation. He has now invented a rank of his own. Someday I would love to share a picture of all the rank system we see in Paro airport.