Of Farewell Speeches, Dinners and Quotas 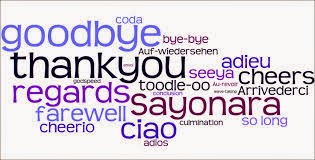 This year, I have attended quite a number of farewell dinners. First was a farewell for our colleagues who moved from Paro to other Regional offices. All I remember is that we had a lively evening. We had art competition. Prizes to the winners were awarded from the amount collected from the judges. (you see, being judge at times is an expensive affair!!) From a lucky dip bag, we were made to pick a rolled paper. It contained a weird question. Like it or not, each one had to answer it.  I was asked a question as to what animal I resemble. Although donkey came first to my mind, I said tiger. I don't know why. Few seconds later, I heard someone say dog.

Then, the obvious thing of giving farewell speeches started. I was given a chance to say few words too. But few seconds minutes into my speech, I soon realized that I am more of a listener than a speaker. As the round progressed, some officials, especially the ladies became more emotional. They displayed their bountifulness in tear. Some cried, as if  its going to be a doomsday tomorrow.

The next farewell I attended was a farewell to our former Director. It was a wonderful evening too. Food was nice and so was the wine. Thanks to our concern organizers. I saw officials exchanges pleasantries. I saw how each one tried to sound nicer than the other, (as if nice words are only meant to be said when we are having good food and someone is soon going to leave) I may be wrong here, please pardon me. Later he came shaking hands. Seeing me, he apologized me for not being able to help me out with my transfer appeal. I felt sorry because that was the most stupid move I have ever made.

And the last farewell and the most recent one was a farewell dinner we had in honor of of out going Commissioner. In words of someone, she is known for "her rough behavior but backed by a good heart". She is a woman who wore 10 no size shoes, intelligent and hardworking. A deserving woman who would't think twice to say a black is black and white, a white. A woman who, I believe rose from a humble background to a prominence of her own. She is Madam Kesang Deki. To me she is a living example of why a Bhutanese woman should't brag for an undue thing called "QUOTA". She will soon join RCSC as a Commissioner.

Meanwhile, when our over K5ed superiors and colleagues went on rampage with their unique farewell speeches, I was just clicking pictures here and there. With that I just thought how right I was into believing that a quota for a women in politics (and any other filed in Bhutan) is such an unfounded thought. I ran through my memory and few personalities caught my imagination. With their kind permission, I would like to share their pictures for our folks to understand our women power better.


Bit of a drift here and my apology for not being able to accommodate many such women on my blog. But nevertheless, it was a gathering worth my 108 km drive. It was intellectually enriching. I say this because, I had the privilege of overhearing some of my colleagues discuss issues of national importance.