Below is the full article on Shingkhar by Dr. Karma Phuntsho. It is featured in the in-flight magazine of Bhutan Airlines; "Kuzugangpo la" and therefore, people who have travelled recently in Bhutan Airlines,  must have read it already. But with kind permission from Dr. Karma, I am sharing this article on my blog for my personal record. I hope Bhutan Airlines do not mind like I did not mind with them when they used my pictures without credit. Anyways have a nice read and please look how I look with Dr. Karma 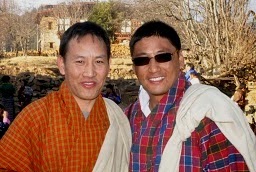 Even at the peak of winter with its biting cold, Shingkhar village has an ineffable blessing in its air. A special presence and power imbues its pristine surrounding and rich cultural life. There is an unseen comforting aura, which makes even its sub-zero temperature and piercing north wind quite bearable. “It is due to the blessings of Longchenpa,” say the villagers almost unanimously.

This great philosopher saint from southern Tibet visited the Shingkhar valley in the 14th century during his sojourns in Bhutan to avoid political turmoil in Tibet. He started in Bhutan what became known as the eight spiritual sanctuaries. Shingkhar Dechenling – the sanctuary of bliss – is one of them. Nestled on a hillock above the village is Garkhai, which is often referred to with its more literary epithet Drokri Rinchen Jungney – the source of precious things – where the saint meditated and composed some of his famous treatises which today form the classics of Nyingma school of Buddhism.

Longchenpa is the greatest synthesize r of the Dzogchen tradition – arguably the most advanced meditation philosophy and practice in Tibetan Buddhism. With the rapid spread of Tibetan Buddhism across the globe today, his influence has also reached many parts of the world. Yet, it is only in Shingkhar, where he is celebrated as spiritual overlord and also the progenitor or of its leading lama family. To reinforce their debt and devotion to Longchenpa, the villagers have recently created a large thongdrol, an intricate applique wall hanging through voluntary contributions. The artistic creation features Longchenpa with prominent hierarchs of the lineage including two former lamas of Shingkhar. The thongdrol was unfurled on the last day of Shingkhar Rabney, the grand annual festival of the village.

The five-day annual Rabney festivity starts with the hoisting of a flag in honour of the protector deities on the temple rooftop. “The festival regime begins once the flag is hoisted and you are liable to be fined if you break any in-house regulation”, says Ugyen Tshering, Shingkhar’s most active and dedicated village elder. People are briefed about the proceedings of the festival and the code of conducts while insignias of temporary offices and duties are handed out to the participants. Fully sponsored by the villagers, the festival runs for five days and the Shingkhar community conducts it with the flair of professional management team, despite the endless drinking rounds and boisterous merriment.

The festival in 2014 was particularly poignant as one of Shingkhar’s most illustrious sons, Dasho Shingkhar Lam, returned to the village after over a decade. A leading statesman, artist, lama and community leader, Dasho Shingkhar Lam has guided and worked for the village until he suffered a stroke. Accompanied by other members of Shingkhar community who work and live outside Shingkhar, Dasho Lam returned to the village on a wheelchair to preside over the festival. “We have a proud past and we must ensure its future,” Dasho Lam told the crowd in a choking voice on the first day after narrating Shingkhar’s history.

The Rabney festival programme is one of the most unique in Bhutan. Cream-coloured Chath Dorji is the master clown of the festival and the man behind the mask is believed to be have been preordained to play this character. If he somehow missed the festival, the temple deities are said to haunt him until he came to play the clown. Chath Dorji is accompanied by a host of other clowns, the most senior being Ashangla, a dark haggard character. In addition to the jokes and pranks of the clowns and the sacred and folk dances to entertain the crowd as usually seen in Bhutanese festivals, Shingkhar Rabnye has many unique performances and practices.

The second day of public show begins with an impressive procession leading Shingkhar’s main relics out of the temple. The statue of Buddha, attributed to Chogden Gonpo, a reliquary stupa and a skull of one of Shingkhar’s spiritual ancestors are paraded through the festival ground in a procession led by girls holding offerings of food, young boys carrying fluttering flags and monks clashing cymbals in a rhythmic dance.

The highlight of festival is, however, the dance of Shingkhar’s tutelary deities. First of these is the dance of the divine couple, Lhamo and Gonpo, performed in a sombre mood of religious incantations, shrilling noise of trumpets and cries of valour and victory. These two deities are followed by Choekyong or the gigantic Yak-headed deity with some dozen men playing the exuberant yak, quite like a Chinese dragon dance. When the
propitiation of the Yak-headed deity is over, the crowd of spectators rushes to it in order to receive its blessings, which it bestows bounteously with its thick hairy tail in the form of a pounding whack. “I will not get ill for another year”, remarked an old woman after receiving the whack. The blessing is followed by a cheerful game of rubbing coarse popcorn on each other’s forehead to celebrate bountiful harvest.

The pinnacle of the festival is the dance of Drangsong, the most revered nine-headed deity. He is one of the three main deities of the Dzogchen tradition and is said to have served Longchenpa during the latter’s sojourn in Shingkhar. In a highly solemn atmosphere of purificatory incense smoke and deep murmur of prayers, the incumbent lama of Shingkhar, Nidup Dorji, performs the slow dance within the temple space (with no photography allowed). The temple is filled to an inch as the crowd rushes to pay homage to Drangsong, affectionately called Meme or grandpa by the locals.

This is followed by the ritual of exorcism when large torma effigies for expulsion are taken to the outskirts of the village. In course of the sacred affair of exorcising the evil, the villagers engage in a mischievous game of hitting each other with buttocks. Men and women waggle their hips to hit unsuspected spectators with the buttocks causing a roar of laughter each time someone is toppled to the ground. The festivities continue with the dance of the eight characters of Guru Rinpoche on the fourth day. Each night, the young men and women tour the village sipping local brews and performing traditional dances.

Shingkhar represents a traditional community in Bhutan, which has not succumbed to the ills of modernization. Although change is palpable even in this remote highland, it has so far withstood the unhealthy influences of changing time. Agricultural farming and cultural life are still strong in Shingkhar but for a community which had a thriving culture of yak and sheep rearing, Shingkhar has sadly no sheep left today and yak herding has stopped a few years ago. During the ritual of making offering to the tutelary deities on the third day, two effigies of yak and sheep made out of dough were placed as substitutes for real animals.

The village is still quite populated and vibrant compared to many other Bhutanese villages, which remain empty after its members have moved to urban centres. Although some minor differences and disputes are inevitable in a closely knit community like Shingkhar, the village enjoys a vigorous sense of solidarity and a tradition of fervent spirituality. A few years ago, it fended off an intrusive foreign investment to build a golf course on its open pastures and it continues to juggle with new development projects such as the new highway, which is planned to cut through its sacred landscape.

Will Longchenpa’s blessings endure to keep Shingkhar peaceful and pristine and to avoid the malaises of modernity, which it will have to eventually embrace? Only time can tell this. For now, the village is delighted about the successful completion of its annual festival with unprecedented attendance and an itinerant visitor, like Longchenpa many centuries ago, can only wholeheartedly rejoice in the noble aspirations and efforts of its members.