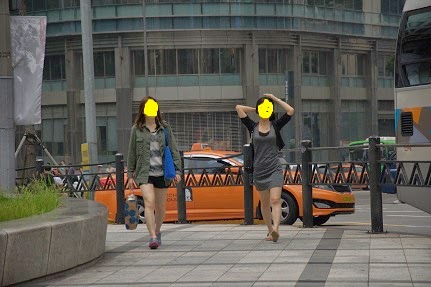 Without much hitch, I have completed my first week here in Korea. Each day has been an exciting one. I am privileged to have the company of my three trainee friends from Sri Lanka, Bangladesh and Philippines. While the Lankan girl and Philipino guy are friendly, its the humor of our Bangladeshi friend that keeps us all going.

According to Mr. Naser, the Asst. Director of Bangladeshi Customs, He feels that laughter is something which a metro city like Seoul is seriously lacking. He feels that without laughter, attending a training on access and excel wouldn't be an easy thing. Perhaps, he is now getting the exchange rate of Korean won to the USD right, because he doesn't talk much about travels and gifts any more! His disgust for Korean food, seems have reached to the highest limit. Kimchi, he said is a miserable food. True to his words, in one of the recent Korean science journal, it rightly said that the amount of salt being used in Korean food is of a big concern for the Koreans themselves. He calls afternoon nap as "marathon sleep".

Well, let me not gossip more about my friend. Rather I would like to take this post to share my own Korean experience. To begin with, Korea is one country that I know, rose from the cruelty of colonial oppression and brutal shocks of the wars. Spurred by the greed of super powers, the cold war effect in peninsula finally ended with the division of the motherland into South and North. While, North (so called the fatherland by its founder Kim Il-Sung) chose to remain secluded and cut off from the world, South has progressed to this level. Few of them tell me that love for the motherland and hard work are the key component that brought them thus far.

Korea, not doubt is a trendy place now. Especially in Seoul city, fashion, I think is the life blood, that is keeping the city alive. I am guessing, whether this fashionestia is responsible for making the Gangnam area more expensive then the rest. So here are few observations I made in Gangnam city. 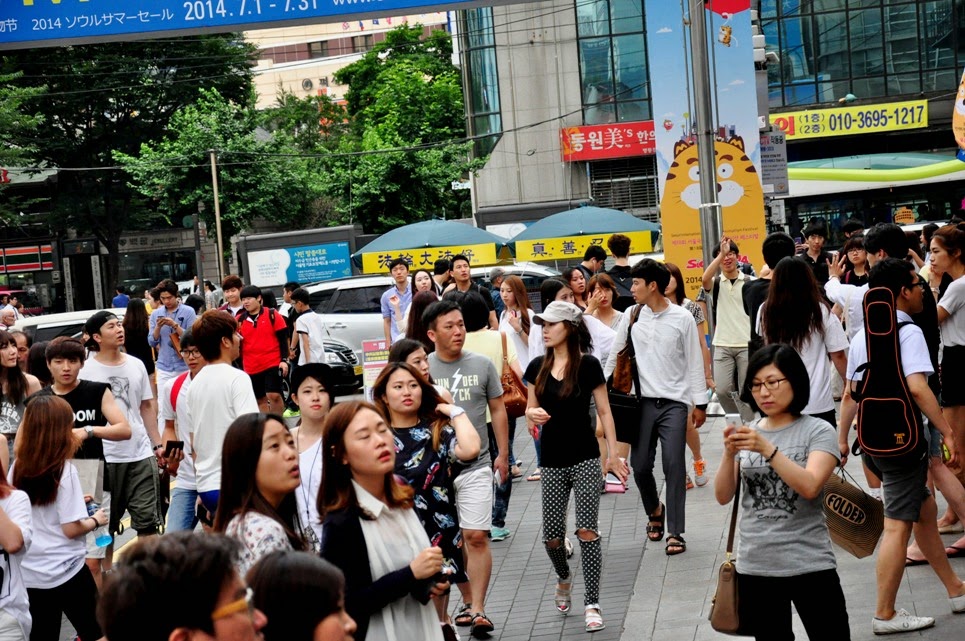 People: Outwardly, many Bhutanese people have the notion that Koreans are among the most good looking people in Asia. I think we are right. Both male and female, they are known for their sharp features, fair skin and unique hair dress ups.They are actually phone-liking people.

Many Bhutanese youth, who are oblivious about the recent proliferation of so many plastic surgeries actually wanted to look like Koreans, sing like Koreans, dace like Koreans, eat like Koreans and live like Koreans. Apart from the external looks, Koreans, I think are steadfast people. They are people who mind their own business. Free in their own world, other matters seem to bother them least. To understand Korean, one simply need to open up the conversation. Its the gate way to their beautiful heart. 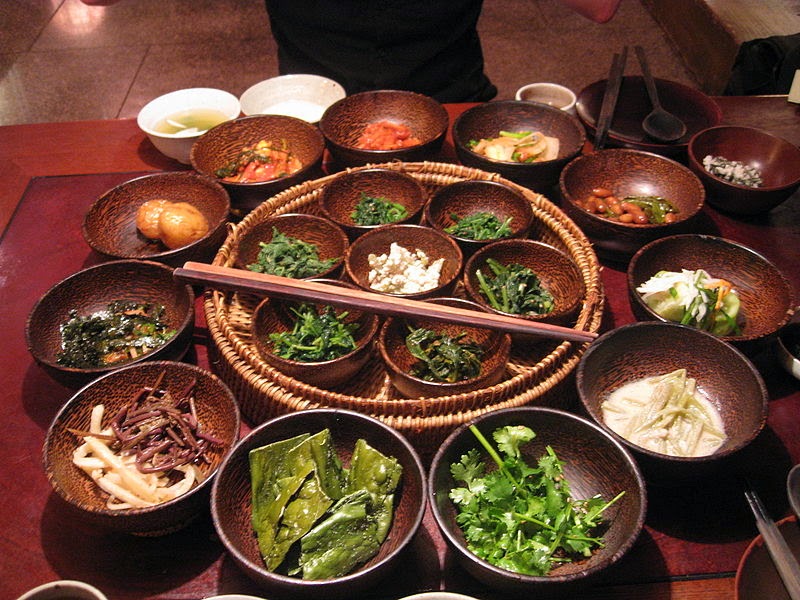 Food: Kimchi is the first thing that come to my mind. However, there are thousand other Korean dishes that are still prevalent. Although there has been an unprecedented invasion of KFC and MacDonald and other foreign (fast) foods, indigenous Korean foods, it seems have withstood the foray. Almost all kinds of foods are served hot and spicy, but at a equally hot and spicy price tag too. Some served in stone pots and some in bamboo canes.

Unlike the Japanese (who uses bamboo chopsticks) and Chinese (who uses wooden chopsticks), Koreans use Chopsticks made of steel. This according to one Korean official is to poke their enemies.. ha ha. He was kidding. And here is one thing that might prove useful for foreigners traveling to Korea. Koreans' one serving can satisfy 2-3 average hungry person. Besides main dish, rice and kimchi being the popular side dish wre served with numerous other dishes. Even the soup will have a side dish of rice. Now Bhutanese people, how do you like it? Therefore, to minimize cost and reduce wastage, avoid ordering every individual a different meal.

Shopping: Seoul is an international shopping hub. Any doubt about that? However for an average shopper, Gangnam is one area I would not recommend. In fact I would not recommend any of my Bhutanese friends to shop here. They have all the killer price tags. That is why our Bangladeshi friend have humorously chosen a name for Seoul; The "dead city".

I am told that Gangnam area is a shopping place for trendy people, like pop stars, film actors and for politicians. But for an average Bhutanese civil servant like me, I find every place in Seoul, so so dear. And the saddest fact is that, to our own misfortune, our training is being conducted in the heart of these chic city. Everyday, we are paying twice as much for food, water and for beer and soju. With each passing day, our wallets are becoming thinner and thinner.

Cars: One thing that is all glittering about this city is the variety of cars they have. Starting from their home made KIA and Hyundai they have all the cars between the sky and the earth. BMW, Mercedes, Lamborghini, Ferrari, Audi, Ford and volvo are few I can name. But surprisingly, in my one week, I just saw one Toyota car. This to me, shows the intensity of rivalry between the car makers of Korea and Japan has reached. 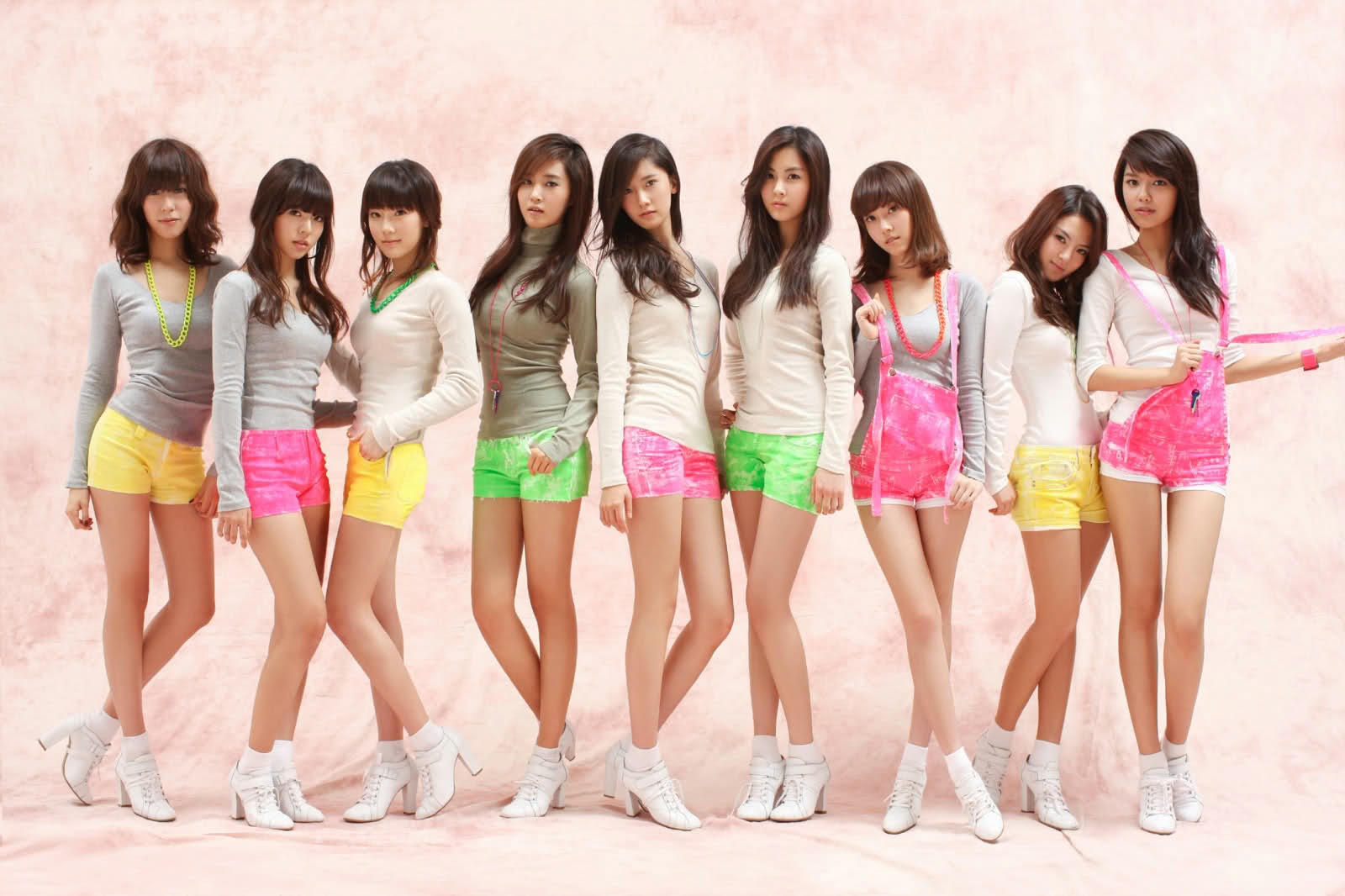 Girls:  Without writing a line on Korean girls, my Korean experience wouldn't be complete. Yes, they look exotic, sexy, slender and cute. They are girls in the world, who defined the real meaning of "shorts" and style. Shorts at the moment seem to be the most popular outfit among the Korean young girls. Or is it because its summer now? Our Bangladeshi friend call them the "Long legs".

But there is one dark side to this beauty aspect;  -the plastic surgery. I don't know how many people view it. For me, I am just wondering why, especially the beautiful girls require modification when they are richly blessed by mother nature. I feel its just a plain greed to simply look artificially beautiful. (for few years?) it is an act of defying and deceiving nature. If Joan Keats were alive, he would have died murmuring "beauty is impermanence"

By the way, there are some ugly girls here too. I don't know from where they have come. They are huge like elephants! Some have arms bigger than my Thais.  They look like man! I think they could  have easily qualified for a place in WWE!

Language: Not many people speak English here. But when they do, they are far better than us. Otherwise most people talk to foreigners in their own Koreanized English.