One Reason Why Bhutan’s Private Sector is doing poor 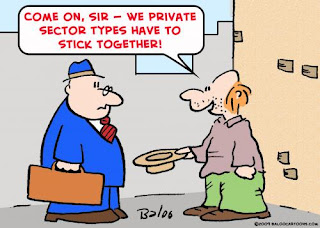 But not many people understood the real meaning of private sector development. Due to this single skewed reason, the normative Policy tools like subsidy, grants, permits, and tax holidays could do too little in too long time to bring major changes in the face of economic growth.

To be practical, we are a nation with not only with scarce resource endowments but we are equally a nation with equal dismal consumer numbers. The only natural resource we can be proud of is our water resources, which are threatened by exogenous factors like climate change, continuous deforestation and ecological imbalances elsewhere.

In absence of strong and vibrant private sector, our export figures are always over shadowed by our towering import figures. It means the multiplier/accelerator affects are always negative. In absence of positive multiplier/accelerator effects, it created low feasibility investment atmosphere.  The low level of investment in an economy meant that our income levels are low, which led to low level of saving. The low level of saving meant that people are paying high rate of interest (meaning Investment is becoming a costly affair). Now if we carefully analyze this circular flow of events in our economy, then we are making our economy worse by ourselves.

So where does the solution lie? How do we make our private sector do better?

The significant answer lie in the way we distribute our precious human resources. As rightly pointed out by our beloved King during his coronation speech in 2008, he said; “Bhutanese people are nation’s greatest asset”. I second His majesty’s thoughtful statement. By making this single landmark statement, His Majesty meant volumes.

To understand the context correctly, let us first get the basics right. I am positive that majority will join me when I say that our education system is still a job oriented one. To be more precise, a public job oriented. These patterns of employment created a very prejudiced system because majority of the talented, knowledgeable, creative, smart and skilled manpower are absorbed either in Politics or in public sector. With apparently inferior residual manpower, private sector could do little to compete with public sector for growth, development and expansion in terms of managerial innovation and available resources.

To put it in other words, our economy is always in Pareto-optimum favoring public sector. It may be hard for some people to digest this, but there is a general economic belief that in reality, smart people always does smart job. Therefore, the public sector with given quality of human resources has always believed to have been the major difference maker in the growth of Public sector and private sector. The other normative economic tools made by public sector and politicians in the form of taxation policies and rules also affected the growth of private sector.

With this reality, there is an opportunity for us to make a tradeoff between strong or even stronger public sector or a strong and dynamic private sector. Or how about we also give due consideration to both by applying a Pareto criterion.
at Sunday, September 04, 2011