Of Bum Fights in Shingkhar

For the folks of Shingkhar, the fourth or the second last day of the Rabney is special in its own way. It is on this day the dance of our most  revered and worshiped local deity, Meme Drangsong, "affectionately called Meme or grandpa by the locals take place". "Drangsong is one of the three main deities of the Dzogchen tradition and is said to have served Longchenpa during the latter’s sojourn in Shingkhar. People across the country, (mostly the stroke patients) come to pay homage and receive blessing. I don't know how science can explain this but I have often seen some of them get better after the blessings.

The other thing that makes the day special is the "bum fight". While lamas and monks exorcise the evil from the village by burning the effigy, which usually takes place at the outskirts of village,  folks both young and old, male and female indulge themselves in a funfair which looks barbaric and total rustic. Its called "chong mak" or Bum fight.
Its usually males versus females. Except for the biological differences, no one knows why it has to be that way. They hit each with their buttocks without mercy! and throw their opponent flying into the air an on the dusty ground. Each time an opponent is toppled, it causes a huge roar of laughter. As a sign of their surrender, some, they chose to sit on the ground. But that is not a done deal. Opponents come and drag them to rise and continue butting until the rival is completely exhausted and in some cases, half undressed! Some, they choose to climb on the tree tops to avoid the attack. 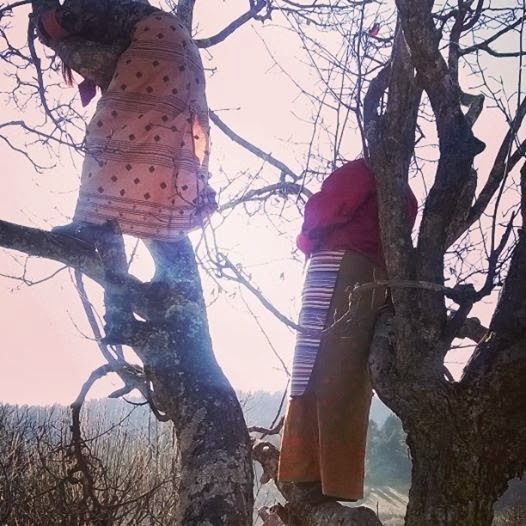 Today, some elders in the village say that it was invented by our late Shingkhar Lama Choney and my late grand father. Other than that little is known about the origin and its significance. Nevertheless villagers seem to enjoy it, heart and soul.

When the ritual is over, people sing in unison. "Gyelo Gyelo, Lha Gyel Wa Sho Che, Dre Pham pa Sho che". meaning victory to the god and defeat to the evil. The Lama in his black hat dance costume follows the folks back to the Lhakhang where the victory celebration awaits at the courtyard. But the infamous bum fight, pushing and pulling still ensues, each one accusing the other, of not not knowing the ethics of the game in somewhat angry nevertheless laughing mood.