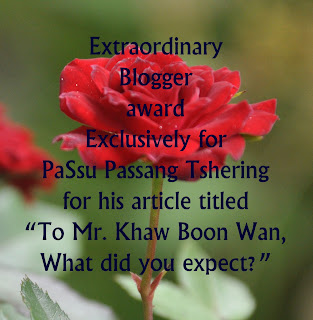 This is my  humble award to PaSsu Passang Tshering for his article " Mr.Khaw boon wan what did you expect? His article has received an overwhelming response, both form Bhutanese, Singaporean and people from abroad.


His article obviously came as an eye opener to many Bhutanese where happiness has been a benchmark in everything we do. We talk and dream a lot about it. Happiness is subjective concept of which the definition differs from person to person. Here in Bhutan, we believe that one day happiness is within the reach of humanity. Perhaps this looks reasonable on few conditions. World need to think little less about the materialistic progress and little more about saving the planet earth. I think we are one country who at least took the initiative of bringing happiness concept in fore of human development.

His Excellency Khaw's remarks have been received in varying reactions. Obviously many Bhutanese weren't happy. Many people felt the remarks were unjust and unfounded. If a week was enough for Khaw to draw conclusion on Bhutan, GNH, and Happiness, then the world would have been a lot more happier place already.

Following the footage of his speech, it becomes evident that Mr Khaw has exposed his weakness by speaking a lot on subject which he knows least. Bu neverthelesss I am very happy to see many Singaporeans apologizing Bhutan and Bhutanese in place of their Minister. This shows how much Singaporean in general like Bhutanese believe in sacredness of happiness.

And for now its very imperative that we do not draw a dividing line on the basis of a comments made by an individual. Rather Bhutan and Singapore should work hand in hand to make this world a better place. Singapore and Bhutan have come a long way and still have miles to go together.