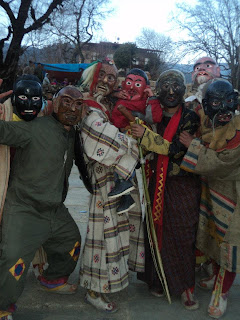 
Well, the thing of Rabney is long over and gone. I am now back in Golaipang, safe and sound with my family. I had the most memorable Rabney of my life. I think I will never forget the happy moments I had with happy folks of Shingkhar.

When I was a young boy, My mysterious father and mother would always tell me stories about the mythical Lhamo and  terrifying Gyembo. One story that I vividly remember is the story  about Choejong, their Yak,  who farted so bad that  it blew up the nose of Gyembo on their way back to Golaipang after Rabney. That's why  today, Gyembo has a nose, that looks somewhat flattened with its tip raised.

That is just one side of the story. (especially for curious kids)

The real story, as far as the history goes is that, it goes as back to the time of great Nyingpa master, Longchen  Rabjam himself. It is believed that when Longchenpa was mediating in the Tibetan region called Gangri Thoed Kar, the mermaid, (Tshomen) who resided in the lake called Mapham Yumtsho invited the master on many occasions. Although he rejected the initial invitations, he however consented at last to visit the lake once.

When he finally visited the lake, the mermaid requested him to discover something from the lake as Ter (treasure). As requested, Longchenpa discovered a pair of white horn that belonged to a yak.

Many years after Longchenpa, his disciples composed a dance of a yak. They used the same horn which Longchenpa carried from Tibet. It came to be known as Choejong.  Today it is considered as the most sacred relic of the valley.
at Saturday, February 25, 2012