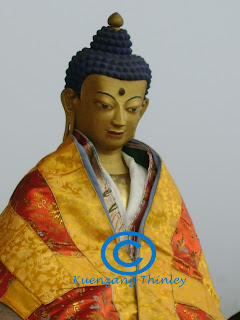 The life size copper statue of Buddha, known as the yeedam to locality is one of the most sanctified and chief relic housed in Shingkhar Lhakhnag. It is also known as Yeedam Khamsum Zoelnon. Although its history and origin are not much known, (even to the majority of the locals) the statue is revered to as the wish granting object besides being worshipped as Buddhist artifact.

Long time ago, a tax collector from the court of erstwhile Debraja visited Shingkhar. Little did he realize that he was there for a dual purpose? –he was there to not only collect taxes, but on repeated persuasion from the locals, he was also there to make a secret wish that was going to have a lasting impact in his life.

Although, his wishes were not explicitly revealed, implicitly, it was his wish to become Paro Penlop in a very foreseeable future. Should the wish come true, he then made a secret vow to install Golden Pinnacle (serthok) on the roof of Shingkhar Lhakhang in gratitude.

Amazingly, the tax collector, popularly known as Agay Haap became Paro Penlop shortly. Not only that, he also become the first person to install serthok on the roof Shingkhar Lhakhang as promised.

There are many such stories. If anybody is interested, then please visit Shingkhar Lhakhang. Remember me, if your wishes come true.