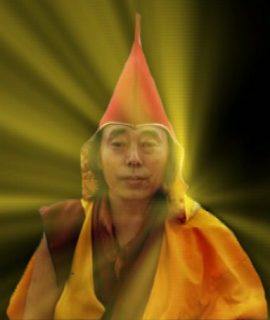 When I first met with the Rimpoche, I was a little boy then. We initially met in the early 1990s when he came to perform the last rites for my late paternal grand father, who was him self a clergy man.

Personally, I have a great affinity for the clergy people. The very sights and sounds of rituals invariably elated me and draws my attention. So during the 21st day ritual of my late grand father, it was an opportunity for me to sulk myself into the presence of  Rimpoche. 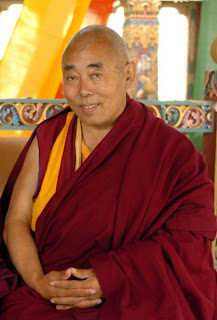 Especially during the lunch breaks, I would often go to Rimpoche's resting place (under the pine tree, just below Shingkhar Naktsang) and spent hours chit-chatting with him. I remember asking him so many questions to which he never showed any sign of displeasure or annoyance. in instead he addressed to me as charo,and answered all I asked. He drew beautiful pictures with his free hand. It fascinated me and left me awestruck! But, I thought he was an ordinary monk wearing ordinary red robe who performed ordinary Buddhist rituals!

I was totally ignorant about who I was dealing with.

Later, with the passage of time an space, I came to know that he was one among the three reincarnations of Terton Pema Lingpa and that he was the most revered Rimpoches' of our time. Since then, I saw Rimpoche presiding  and performing  many rituals both near and far, with his humility as strikingly as ever.

Then in March 2006, I became very ill and I even went to an extent of predicting my own death somewhere in the month of October, the same year. My parents, my siblings, my wife and all my relatives both far and near panicked like hell. I saw them all getting desperate and wild.  Besides taking me to doctors in Thimphu JDWNRH, Haa, IMTRATI and Doctors in Lungtenphu Military Hoaspital, I know they left no stones u n turned to save me, starting from performing a Terdha ritual to Pawo ritual. They even went to the extent of performing a ritual by Indian Sadhu!

When nothing seem working, my elder brother finally sought to seek prediction form Rimpoche himself. Rimpoche responded and responded positively. He told my brother that I would be OK in months time.

True to Rimpoche's prediction, I finally recovered from my illness in the month of September, the same year (a month before my predicted death). Finally my life came back to normal and I could finally attend my duty in my office. Later,I also met Rimpoche himself and introduced my self and thanked Rimpoche for all his blessings. Just in case I fall sick again, he even consented to teach me a mantra which will avert future misfortunes altogether. He took a small paper and wrote the mantra and gave it to me. (

With this, I saw Rimpoche travelling by air often and most of the time there was only his aged mother escorting him. On my further inquiry, I found out that Rimpoche was battling with a deadly diabetes and that it was getting worse. I saw Rimpoche's health deteriorating with each passing travel he made. I last saw Rimpoche unboarding the flight on a pushchair then slowly he passed through and never to be seen again. I sat back on my chair with my eyes welled with tears, knowing there was nothing I could do to save him.

Then finally there was this news in media http://www.kuenselonline.com/modules.php?name=News&file=article&sid=15226

Today, I am not only a fervent worshiper of him but also a follower of him with all my heart and soul, because in his silence he taught to me that "Simple and humble is perhaps the temple of god"