I have just finished tending to my money plant in my room. Its been a year already, but my plant still refuses to grow.  You see, I have tried so many things that could heighten the growth of my plant. Firstly I stopped using that saline-tap water and started spraying treated water. I even manured it with banana peels and melon covers! But so far it hasn't done any good to my ever-ready-to-wilt plant. So yesterday I went out and met our flower gardener. He gave me another plant whose name neither of us knew. Nevertheless, it looks good, green and fresh. I hope it doesn't remain dwarf like my money plant. 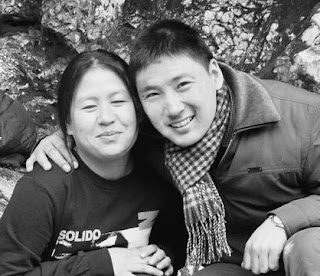 After that, it checked my Facebook status. There I just saw two things that caught my attention. The first one that I saw was that, some twenty eight people liked my picture. (me with my wife). We took that picture on our way to Bumthang last December (2011). For my wife, it was her maiden trip to my village after we got married in 2005. By the way, I had to do lot of photo editing on my face to match my beautiful wife.!

"Another man kidnapped, wife injured" was the second thing that caught my attention. That topic honestly made me go wordless. I was saddened to my core when a taxi driver went missing few weeks ago. But at the same time, I was jubilant beyond my words to hear about his safe return. His family negotiated with the  kidnappers and paid a ransom as demanded. He was indeed rescued by his own family! and this is a big story for our security system.

Our people are being terrorized and traumatized on our own land and our leaders are busy arguing with each other on the subject of "patriotism". They are so busy fighting a war of words with each other that they are forgetting the real enemy doing harm to its ordinary citizens. Till date we have not even heard a single word being said by our leaders on this issue!

We also do not know whether it is right thing for a government to allow citizens to deal with those people who are forcefully intruding into our safety and security Common people are mostly left at their own mercy in times of desperation. To borrow a phrase  from my friend Passu, People are forced to give monkey an apple because monkeys have now overpowered our security system? And those monkeys will no doubt come back again and again looking for more apples.

Our homes are supposed to be the most safest place for us. Now that another man is being abducted forcefully right from his door step at gun point, there seem to be no safe place at all for our fellas who are especially living in the south. For how long are we going to let our fellas pay ransom for those Monkeys?

By the way do we even have a clue of who these people are? Why is our Government, Police, Army and Media so so dead on this issue? If we at all have a patriots, who have so far busked with patag and perks, then we have a situation here. Time is calling for a practical patriots!
at Sunday, November 18, 2012