Freedom in Exile by H.H The Dalai Lama of Tibet 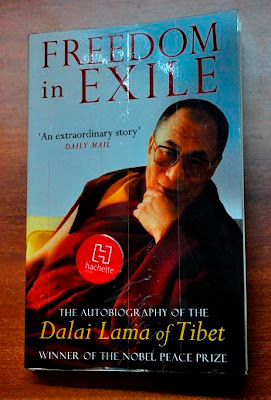 "Freedom in Exile" by His Holiness the Dalai Lama is by far the most touching autobiography ever written. The love and affection he have for his fellow beings are inspirational and are heart warming. Its a story written from the heart with full of emotion and feelings. Its a story of a compassionate Buddhist leader who was over powered by foreign aggression and then subsequently forced him into exile from his peaceful country, often referred to as Shambala (I know there aren't many people who haven't read this book)

One thing that makes this book truly beautiful is its spontaneity, humility and humor. Flipping through the pages, it made me laugh and smile. It made me think that H.H is as much amusing as he is holy and venerable. Flipping more pages, it made me even cry. It made my heart go out for all our Tibetan brothers and sisters who are living under the harshest possible condition in their own homeland. The kind of torture, bloodshed, execution, and imprisonments described in the book are nightmarish and are deeply disturbing. It also arouses a great sense of sympathy to those who are living as refugees around the world with constant pains and pangs of being separated from their loved ones and their beloved homeland.

More then the story of a H.H, its also a story of how the rest of the world failed to protect innocent Tibet from the clutches of Communist's greed. Its a sad story of how Democracies around the world was silenced by the might of misinterpreted socialism in China under the dictatorship of chairman Mao. When Tibet saw no one with capacity and willingness to rescue its poor self, it was "power from the barrel of a gun" that did the rest in Tibet! The book also gives us an insight as to how Tibet has since then become a place of horror, cut off from the rest of the world and completely dark.

The book gives us a brief historical account of how Tibet and China coexisted as a neighbor for eons. It also sheds light on those disappearing yet sacred tradition and culture of Tibet. The way H.H describes about the "magic and mystery" in Tibet is hilarious. The kind of patience H.H has shown towards reconciling with  China are true reflection of unmistakable Bodhisattva. 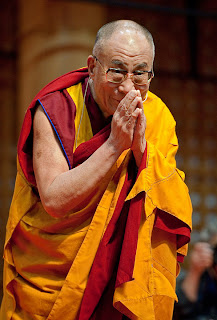 The book also gives us an insight to the the most regrettable affair of the world. It elucidates about the greatest blunder of a greatest personality in the history. Its how Jawharlal Nehru, the then prime Minister of India, who underestimated the the kind of threat new China posed for recovering and already weakened India (under the British colonial rule) The idealist Nehru was rumored to have died heart broken, when he finally realized that China stabbed him from behind. It has a reference to 1962 war in which India suffered bitterly. "hindi-chini bhai bhai" from thence became Hindi-Chini Bye bye. Sino-India relations remained cold ever since, creating further distrust and instability in Asian region.

Besides those horrifying stories, H.H also narrates a story of his own family. Through his expression, we can clearly understand the amount of love, faith and trust he have towards his family members; -especially towards his  mother, brothers and sisters.The way he bullied his late brother Lobzang Samten is way too memorable and would bring both tears and mirth in any readers.

Although H.H extended his sincere appreciation and gratitude towards every host country for treating all the Tibetan people with love and care, H.H have also put forth where some Tibetans have also gross injustice in some of the neighboring countries. Particularly in Nepal and in Bhutan. This has a reference to how Tibetan rebel forces were ambushed by Nepali forces in Musang and how some 21 Tibetans "were thrown into jails" of  Bhutan "without proper trials" due to some political problems.

And the most important part of the book is H.H's five-point peace plan. The most important point in the plan is H.H's intention to transform Tibet into a Zone of Peace. This according to him is only possible if China demilitarized the entire Tibetan plateau.

"I would therefore like to conclude this book with a personal note of thanks to all friends of Tibet, The concern and support which you have expressed for the plight of the Tibetans has touched us all greatly and continues to give us courage to struggle for freedom and justice, not through the use of arms, but with the powerful weapon of truth and determination. I know that I speak on behalf of all of them when I thank you and ask you not to forget Tibet at this critical time of our country's history.

We, too, hope to contribute to the development of a more peaceful, more humane and more beautiful world. A future free Tibet will seek to help all those in need, to protect nature and to promote peace. I believe that our Tibetan ability to combine spiritual qualities with realistic and practical attitude will enable to make special contribution, in however modest a way.


Finally I would like to share with my readers a short prayer which gives me great inspiration and determination:

For as long as space endures,
And for as long as living beings remain,
Until then may I, to bide
To dispel the misery of the world. "

It was little past midnight, when I finally finished reading the book. The sky outside was clear and air was much cooler. As I stood gazing at the moon and the stars thinking about the fellow Tibetans around the world, I saw a shooting star. A bright one that lasted the longest. It was then I made my wish. I wished for Free Tibet  and Long life for His Holiness the Dalai Lama.