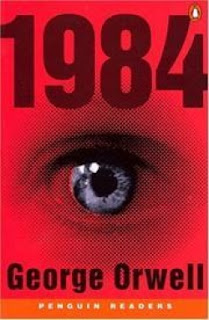 "1984" is yet another intriguing novel written by George Orwell alias Eric Arthur Blair. In what is considered as the last and final novel before his death in 1950, Orwell in his unique way attempts to narrate men's struggle for his freedom, liberty, peace and happiness against the ubiquitous and ever present power of the state. Orwell uses the most eye catching phrase; the "Big Brother" that symbolizes the menacing state power. This menacing power is however exercised by lone party that dictates nearly every aspect of human life.

Through this, Orwell brings forth an imaginary totalitarian state where party or the government controls every  subjects with absolute microscopic details, through the use of hidden microphones, spy and through the most famous party equipment called 'telescreen'. Any subject who broke the party code either by way of action or in thought or even in dream were meted with punishment equal to their crimes. People have virtually no escape from persecution! In most cases people are 'vaporized' or purged. (meaning, they disappear)

And some of the tools and aids that ministries use to get their job done are as follows: They use "thought police" to detect "thought crime" and exercise excessive torture. They use "rewrite squad" to falsify all the facts and truths, fiction department to fictionalize events that suits the party ideology and enforce "double-think" to all inner and outer circles of party except "proles".  'Party says that only the animals and proles are free' because they are incapable of thinking any thing that is dangerous to the party.

It is through this repressive and oppressive methods that the party intends to stay immortal for eons. Therefore the party thinks that it is he "who controls past controls future: who controls the present controls the past".  According to the Big Brother, Political power is not means, but an end in itself.

To borrow few words from the Publishers; "This novel seemed like a nightmarish vision of the future in a totalitarian world. Plying on the public's worst fears about governmental control, different readings saw the former Soviet Union as the object of satire, while others focused on increasingly powerful democratic governments"

There are lot more in the book that will keep you flipping the pages. So just read it for yourself.
at Saturday, December 01, 2012

Email ThisBlogThis!Share to TwitterShare to FacebookShare to Pinterest
Labels: Book