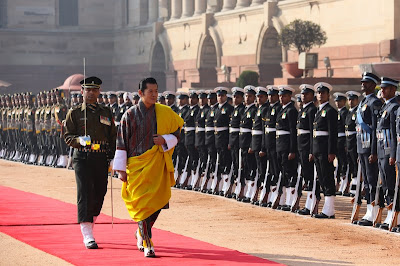 I wish all my Indian Friends a very Happy Republic day.

As the mother India celebrates her 64th Republic day, I would like to join millions around the world in praying for peace and prosperity to flourish in this holy land for eternity. May this great nation achieve all its aspirations. Jai Hind!

This year, I am particularly delighted to see our King grace the Republic day of this great nation. In a most symbolic gesture, the incumbent President of India, Shri Pranab Mukherjee has graciously invited our King as the chief guest! Its a proud and happy moment for Bhutan. This indicates the kind of importance that our closest friend India attaches to us. In other words, it is the celebration of our friendship, faith and trust.

Our King said; "India is the reservoir of the world's greatest religions; the cradle of great thinkers and leaders; the home of almost 20 per cent of humanity; the guardian of more than half a billion citizens under 20 and the fertile ground for great young talent and discovery of all, flourishing under the world's largest democracy. Bhutan is proud to be India's neighbor and closest friend." Indeed!

Indo-Bhutan friendship is exemplary. It is indispensable and irreplaceable. Our Friendship is knot of trust. It is time tested!  "Paved with the geo-political and historical foundations" it is the cornerstone for the success of not only Bhutan but also for the regional stability of entire Asia. Therefore, We have a long way ahead.

Of late, Bhutan was seen going rampant making friends around the globe. Some critics called it the need of time, while some considered it as Bhutan's plain ambition. The last one that caught the public attention was China's desire to open diplomatic ties with Bhutan.

This was received with lot of  intrigue by media houses all over. Many feared rift between New Delhi and Thimphu. Now  that our King and Queen are in New Delhi, its is time to clear the doubts. Its time to reaffirm our friendship. Its time time to further strengthen our cooperation and mutual trust. Its time for Bhutanese foreign policy experts to believe that Indian water is still better than the milk from the rest of the world for Bhutan's progress and growth.