Doomsday OR The Beginning of All Good Times ? 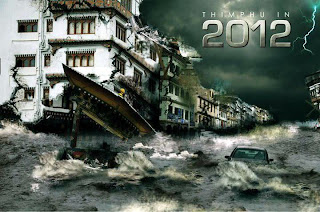 I have seen and heard about the infamous 2012 doomsday for a while now. Many assholes predicted that the world is coming to an end. The Images of doomsday are no doubt, distressing and discomforting. Comments even more frightening! At the moment I have not many words to describe those 'monkey-no work' people, but they surely scared millions to their marrows. My family included!

Few days ago My wife, took me out of guard. She told me that she is dead scared about this thing called 'total black out' of earth this month. She had all the reason in the world to be afraid of, because I am away and all she have with her are my three little daughters, who wouldn't even know that 2012 doomsday is all about. She in fact know more than what I knew about the false impending doomsday.

Finally the 2012 is here and is about to end. All I  can see is a beautiful  day with lot of sunshine. I could see and hear birds chirping and lazy dogs sleeping in my surrounding. Someone said today is Rajnikants's birthday. So no wonder Rajnikant has his uniqueness everywhere, even in his Birthday (12.12.12).

Back home, Bhutanese people, especially those in the west, looks very busy with their Lomba festival. I am sure their spouses from the east must have also joined them. What a day to integrate east and west! Someone on the facebook even said that Dochula tsechu starts tomorrow ( i.e 13.12.12). From the pictures I have seen, the  dances looks extraordinary. I hope all my Bhutanese brothers and sisters will have a great time.

As in Ahmedabad, people are still in the mood of their long gone Diwali. Malls are full and  so are streets. Its colours everywhere and everyday. In the night I can hear thousands of fire crackers explode. not only polluting environment but also causing lot of disturbances in the neighborhood. But the people here think its OK.

More than that, people are readying for their next election. In a few days time, they would have caste their vote for change and new things. More fire crackers and more pollution! More excitement and more jubilation. All in all I see a lot more happier days ahead.