Movie That Made 100 Crores in Just One Week! 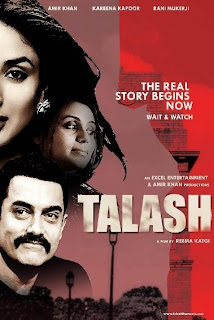 After having watched Talaash, I got the feeling that I watched many movies simultaneously that day. To an ordinary people, It would just appear that a hero in the movie is a Police officer (Surjan as played by Amir Khan) who, after losing his son becomes insomniac and lifeless. He is deeply affected. Overshadowed by the untimely demise of his son, he loses sense and become unmindful about the presence of his equally grieving wife(Roshni as played by Rani Mukherjee). His home completely lacks the light and luminosity of love and intimacy. House for them is just house, not home!

Then somewhere a car plunges into the ocean for apparently no reason. In the mishap, a movie star was pronounced dead . Some calls it a a mysterious death while some knew such cases weren't anything new. Since the deceased belong to the upper strata and affluent class of people, his death pulls the frantic media houses for endless coverage. It brings Police department to pursue the case. The hero gets engrossed, physically and mentally in the case which makes her wife and house more desolate and dismal.

Roshni finds her ultimate solace in her neighbors ability to talk to the dead. She even claimed to have spoken once with the spirit of her dead son, Kamran. Roshni visits her neighbor regularly to speak with Kamran, but this infuriates Surjan. He seriously doubts about their  neighbor's ability.

As the story starts unfolding, it becomes apparent that the whole story had its origin in the death of a prostitute (Simran as played by Kareena Kapoor) But the problem is, Surjan doesn't know about it yet. Meanwhile, in the process of the investigation, Surjan  meets the dead Simran as Rosy.  Although its a spirit of Simran, in his eyes, she looks real. She even helps him fight his psychological problems, and also helps him with his enquiry! She takes Surjan to a place called 'her place, away from the reach of others' The rest of the plot unfolds the mystery behind the death and soon Surjan realizes that Simran died an unnoticed and unheard death. yea, that is how a poor and insignificant people die in many places.

Later Surjan discovers the remains of Simran from 'her place, away from the reach of others'. He gave her a proper funeral. He overcomes his personal problems and unites with his wife after reading his dead son's words as recorded by their neighbor.

You see, that's how Amir and team made Rs. 100 crores in just one week and I have contributed Rs.190 in making those crores.