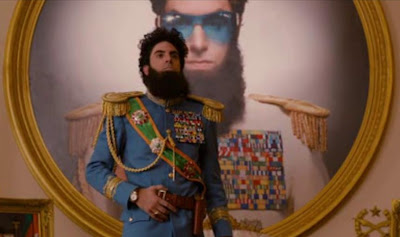 "Dictator" is one strong word that is enough to bring anxieties and fears the minds of many people. Of course they are known for being brute and cruel. They are goons of the millennium! Killing for them is like a play. Dictators are known to for their fondness in torturing, murdering, imprisoning and abusing other fellow beings for the senseless pleasures. Destructive weapons like guns, tanks and missiles for them are like cool toys. Their total disregard for freedom and justice has often brought them in conflict with the democracies.

But here is one Dictator, who will make us laugh all through. Its a movie, about an imaginary Supreme leader of Wadiya, the General Aladeen. He is portrayed as one dictator who possesses the attributes of all the Dictators around the world. known for his iconic bear, he is fiercely guarded by thirty female guards whom he believes to be are virgins.

Genegal Aladeen has successfully managed to keep his country away from the influences of democracy. He had his own reasons to shun the West. He expresses his deep disgust for Democracy. But it was not until he traveled to America (to deliver his 14 hour address to United Nations and sign the the new constitution of his country) that he gets betrayed by his most loyal and trusted friend, -Tamir. Tamir not only manages to temporarily dispose off Aladeen as the supreme leader but he also successfully get the Supreme leader's iconic bear removed permanently! Supreme leader escapes his torture to death but he finds himself soon reduced to an "average American shopper". Perhaps, the supreme leader should have thought about Tamir than about his mid level sudoko!

Back in the street, Aladeen meets a young Jewish girl who looks more like a boy. She offers to help him by offering a job in her store but he rejects. But later, some deep sense of intimacy develops between them.  They do not indulge into sexual relationship, but she however teaches him about "self juicing" stuffs. Although disgusted with her hairy arm pits, Aladeen cannot stop talking and thinking about her.

Later, he also finds his former nuclear scientist, whom he condemned to death few years ago for disagreeing to build a missile with pointed tip. His name is Nadal. Its a long story, but all Nadal and Aladeen wanted is to keep Wadiya as the Dictatorship country. Somehow they succeeds in overcoming Tamirs plan of making Wadyia, a democracy and thus opening Wadyia to foreign investment. He refuses to sign the new constitution. He rather gives a long speech about why Wadyia should always remain Dictatorship.

From his speech, all we come to know is that Dictatorship in it self is created and supported by democracies. Democracies are indeed the ones who are more power hungry and resource hungry. For Aladeen, democracy symbolizes greed, hatred, inefficiency, confusion and corruption. For a mere want of precious resources from Wadyia, (after it becomes democracy), It shows how even China fancies it self considering nothing less then democracy.

The Movie ends beautifully. An Arab leader marries a Jewish girl in the end, something which is only possible in movies perhaps. Well, I may have missed many important parts of the Movie. Its all for you to find it out for your self.
at Tuesday, December 04, 2012