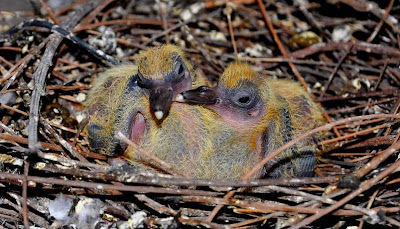 Last year, we did not allow a pair of pigeon to nest in our kitchen. Because they stink and create mess. Those pigeons, somehow managed to prepare a nest just above our door, laid eggs and later even hatched a pair of pink chicks. We saw them grow fast. But sadly in their third week both of them were mercilessly devoured by a crow.

We felt very sorry for the chicks. After that we changed our minds and allowed those bereaved pigeons to nest in our kitchen. We have shown them the highest level of compassion possible from a human beings! We adjusted with their mess.Their appalling smell that would make an average people throw up. And in six months time I have seen 3 batches of chicks reached their maturity and leave the nest. The ones in the picture are the fourth batch.

For now I am waiting for them to grow up fast. We want to put a ban on nesting in our kitchen. Looks like those pigeons do not even have a season! They keep on producing chicks after chicks. Chicks after chicks means mess after mess in a place where we cook. So I am thinking, its high time for them to display their fertility else where. I have seen enough of it.